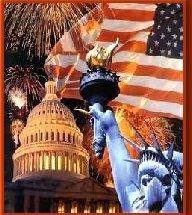 John McCain pledged that if elected he would restore competence to foreign and domestic policy and welcome compromise with Democrats.
Dennis Kucinich has called for the impeachment of George W. Bush and Dick Cheney.
Nancy Pelosi has consorted with the enemy and pushed a bill that places our troops into immediate peril by further damaging our image as a superpower and filling our budget with pork and unneccessary additives.
Hillary Clinton is heading the Clinton Dynasty back toward the White House as she demands a pull-out from Iraq.
Harry Reid has proclaimed that the war in Iraq is lost.
Congress has passed a bill calling for an Iraq withdrawal to begin by October 1st.
And the biggest news shouted out by the mainstream media as being utterly ridiculous is Rudy's statement that if the Democrats get into the White House we will suffer from a terrorist attack that will dwarf 9/11.
Imagine that it is World War II. Nazi Germany, like the Islamofascists, is quickly gaining ground
in Europe as Japan takes over island by island in the Pacific. A political figure not unlike McCain accuses Roosevelt of being incompetent, and proclaims that he would be willing to compromise with those that are against our involvement in the war if he were president. A political hopeful like Kucinich calls for Roosevelt's and Truman's impeachment because the war didn't turn in the allies favor the moment we entered into the conflict and believes that the administration is politicizing Pearl Harbor and the spread of Nazism. The Speaker of the House pays a visit to Hitler, telling him that the American Government may be wrong in their decision to join the fight, and then returns to America to push a bill that has an "exit strategy" in it that basically says regardless of how the war is going, troops will begin to exit the European and Pacific Theaters within the next 6 months (emboldens the enemy). The wife of the previous president is calling Roosevelt a liar and a murderer of German and Japanese babies, proclaiming that she is going to run for president on the platform that if she is elected we will abandon our allies, and leave Europe to be savagely overrun by the Nazi war machine. The highest ranking senator proclaims that due to the strength of the fighting versus the Nazis and Japanese, the war is lost, and because of that we must pull out of Europe and the Pacific Theater at the earliest opportunity. Then, in opposition to the administration, Congress passes a bill calling for a pull-out, well knowing it will be vetoed, but does it so that they could perhaps get the people behind them. Then, as that is happening, Nazi meeting halls are allowed to be set up in the United States under the guise of free speech. The public is required to allow the Nazis in America to goosestep in the airport and straight arm salute each other in public. If any American claims that they were offended or frightened by this, they are accused of being narrow-minded, and accused of a hate crime. The newspapers simultaineously publish articles that print the numbers of Americans dead, and show pictures of damaged towns, but fail to report the numbers of the enemy soldiers killed. In these articles they also state that the war is wrong, Roosevelt is guilty of pushing American democracy on Germany and Japan, and that he should be impeached for getting us involved in such a horrible war.
Or how about this. It's 1775, and. . . well, you can imagine where I'm going next.
Where's our Patrick Henry of today? And why are the Republicans being wimps and allowing the liberal left to pull this crap, and then dancing around it as if they are afraid to offend someone?
Today I accompanied my wife, Mrs. Pistachio, to Los Angeles for her Naturalization Ceremony. Over 4,000 people took the oath in that ceremony. Over 8,000 that day (there were also two other ceremonies) became citizens. They waved small American flags enthusiastically, tears running down their faces, proud to be able to truly call themselves "Americans."
My wife was grinning from ear to ear. "I can vote, now!" she said to me as we met up after the ceremony. "I can vote!"
After the swearing in, we recited the pledge of allegiance (one nation under God included), sang the Star Spangled Banner, watched a video of Bush welcoming the new citizens to the melting pot known as America, and then listened to (and watched a video of) God Bless the U.S.A. by Lee Greenwood. The person next to me whose wife was also taking the oath looked over at me with his eyes filled with tears. I nodded. My eyes had filled up as well. (By the way, after talking politics with him, he received a Political Pistachio Radio business card and bumper sticker - I have a couple stickers tucked into the book I'm reading by Robert Spencer - if you want one,
e-mail me at politicalpistachio@yahoo.com).
I've seen these ceremonies on television before, but this was truly emotional.
"I can vote," she said. "I can vote!"
Posted by Douglas V. Gibbs at 8:06 PM

Congatulations Mrs. P. You did it well, you did it right. Welcome. I am proud to know you guys.

May God continue to bless this Country in spite of those who hate Him.

Anonymous said...
This comment has been removed by a blog administrator.
6:51 AM

Anonymous said...
This comment has been removed by a blog administrator.
8:23 AM

Glad to welcome you to the family, Mrs. Pistachio. And voting being your first thought is noble. Help us protect our nation by voting conservative. Oh, and by the way, Dumb Ox is right, you ought to be the one to replace Rosie on the view cuz you rock!

Congrats Mrs P, now you can beat Doug with a broom and get community service rather than deportation.....Have at it.... LOL

Anonymous said...
This comment has been removed by a blog administrator.
9:58 AM

MK: I deleted it because you are not supposed to be commenting here anymore. And what your nitpicking over the term "America" is just more evidence that your existence here is to disrupt, not add to.

Anonymous said...
This comment has been removed by a blog administrator.
8:33 PM

Anonymous said...
This comment has been removed by a blog administrator.
8:28 AM