Rosie is a loser. She disgusts me. Now, news has broke that Rosie O'Donnell will be leaving "The View" in June. The show will be better off without her, but I don't believe this is the last we will see of that slob. A "Rosie Attacks The Right" show, starring her fat mouth, is surely in the works.
And I support her right to pursue such a show.
Huh?
After all, this is America, and though she is a voice of idiocy, in this country you have the right to voice your opinion. Or at least for now, we do.
Don't get me wrong. I still can't stand her positions on politics and homosexuality and the environment and. . . . you get the picture, but I will always support hers, or anybody else's, right to proclaim what they believe. (and for those of you on the left that consider this a contradiction since I've banned you, it is not. I said you can't comment here, but you are entitled to open your own blog or comment elsewhere. Your right to spew your brand of idiocy is still intact. You still have freedom of speech - I just don't want to hear it in my house, especially when it is nothing more that troll-fodder designed to disrupt.)
As a result of the Virginia Tech shooting the media is demanding new gun control laws. The Democrats are afraid to touch the issue, for the most part, so instead they are promoting a "mental health clause" to the right to own a weapon.
In other words, if you're nuts, you can't buy a gun.
That makes sense. However, in most cases, nutcases that have been proclaimed to be crazy don't normally go on shooting sprees. And I wonder if the gun-ownership exception would fall under abuse. I can see it now. Liberal judges using the psychology tools at their disposal to proclaim perfectly sane people nuts just to keep them from owning guns for the hell of it.
It could happen. 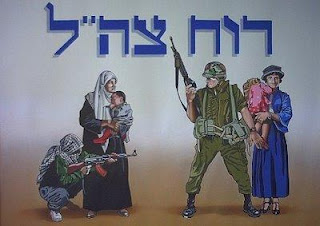 Anyway, I am wondering how such a clause would affect our personal freedoms. You see, I don't believe that the village has a right to tell individuals how to run their lives. Don't get me wrong, laws are in place to protect individuals, but individual rights to certain Constitutional provisions is kind of important to me, and I'd hate for the Left to twist this in a way so as to take more rights away from law-abiding citizens (And they have the ability to twist it anyway they want. Look at what they've done to the War on Terror). We'll see how this one pans out down the road, I am sure.
And finally, you all know that I despise the fact that Democrats and Republicans alike are allowing our borders to bleed as they have. I have no problem with immigration. I have a problem with people circumventing the legal path to immigration to America (in a sense cutting in line) and coming into this country illegally. The administrative process of becoming a resident alien is exhaustive for a reason. It weeds out the diseased and criminals. Besides, I wonder how many Islamic Jihadists have crossed into the United States over our weak border. It's not just a matter of illegal immigration. The issue is a matter of Homeland Security. 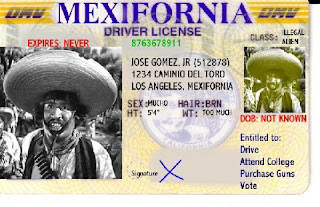 My wife is Mexican born. Her parents immigrated here legally when she was just a baby. She was raised in an environment of Mexican pride and culture. She was also hammered by the concept of the "us versus them" attitude that seems so prevalent in the Mexican culture.
She spent her life, and most of our marriage, claiming that she would never naturalize because she didn't want to lose her culture.
Then something happened. She began to look around and observe. She began to grow uncomfortable with "La Raza" and claims that the white man was holding them down. She began to recognize liberalism in the political arena as well, and one day decided that President Bill Clinton was not what was best for America. She voiced her complaint about him to me, and I replied, "Honey, no offense, but you don't have room to complain. You don't vote."
For years that statement ate at her.
Mrs. Pistachio is like a sponge. She ingests information as much as she can, considers all of the angles, sometimes will ask me my position on certain issues, and then comes to her own, well thought out conclusions. Sometimes her conclusions change over time. Sometimes we disagree. Usually we are on the same page. Her conclusions most often eventually wind up consistent with conservative thought. Finally, a couple years ago, she decided she wanted to be able to make a difference. After playing with the idea for a year, last year she took the plunge and began the process of naturalization. The process has been long and arduous, but now it has come to its culmination.
Tomorrow, April 26, 2007, Mrs. Pistachio will raise her right hand, with her left hand resting solemnly on a Holy Bible, and proclaim her allegiance to the United States of America. She will enter that court building in Los Angeles, California as a resident alien. She will exit the doors of that building as an American Citizen.
I congratulate her for her decision, and appreciate her companionship as a wife.
Perhaps I'll be able to get her to talk about it on this Saturday's Political Pistachio Radio Show. 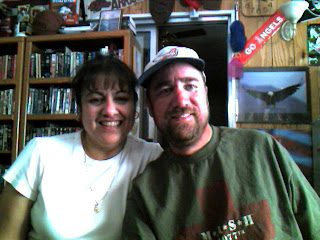 Anonymous said...
This comment has been removed by a blog administrator.
8:53 PM

When I became a British citizen, my friends threw a "welcome to Britain" party (like homer simpson did for Apu) even though I've lived here for 18 years.

I hope you have a nice party and a great day too!

in most cases, nutcases that have been proclaimed to be crazy don't normally go on shooting sprees.

As my father, a man of much wisdom, used to say "A lot of crazy people never hurt anybody."

Congrats on the citizenship party!

congrats u two!..great post and I dont believe Rosie or anyone else has the "right" to lie to the American pple especially during a war!!

Congratulations! And I think Mrs. Pistachio should get Rosie's chair on "The View" and bring that show some class and commons sense!

Good to have you aboard.

Congratulations Mrs. Pistachio! Great to have you aboard!

Congratulations!!!! And great picture too! :)

And Dog nice shirt you commie!

That shirt is a "wear around the house" shirt normally. I guess I should have been wearing my "The Twins Suck" shirt instead. LOL.

Anonymous said...
This comment has been removed by a blog administrator.
6:55 AM

Anonymous said...
This comment has been removed by a blog administrator.
10:02 AM

Anonymous said...
This comment has been removed by a blog administrator.
8:35 PM