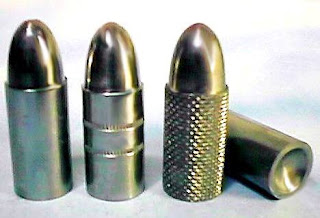 As I opened my newspaper this morning, home from work due to illness, one of the headlines stated that the survivors of Columbine were not surprised by this shooting, blaming the event on the current gun laws.

The idiots on the Left seem to think that if we take guns away from everybody the murderers and criminals and mass-shooters like the one in Virginia won't be able to get their hands on weapons.

I have a message for the liberal-left. Stop thinking - and let that idiotic thought go.

Fact is, by placing gun-control laws upon us that essentially takes weapons away from law-abiding citizens unconstitutionally, you place the citizen, and this nation, at a disadvantage. The criminal and violent element in this nation will always find a way to get its hands on guns. Fact is, robbers don't enter homes if they know the owner is armed, and shooters don't shoot at somebody with a gun pointed at them. And if they do, they deserve to go down.

As for me, if a member of the criminal element comes into my home, threatening to steal my private property or harm any member of my family, he is leaving in a bodybag.

This brings to mind a story I heard on the radio a few weeks ago. Up in Sacramento a man shot another man who had been stealing property from him. The criminal sued the homeowner and won the case because the homeowner was found to not have shot the man in self-defense.

Honestly, in Virginia, part of the problem was the delayed response as well. All I can do is pray for the victims, their families, and everyone else that was affected by this tragedy. The answer to the problem, however, is not the personal ownership of guns. Perhaps the fact that we live in a society that glorifies violence may be a factor, but killers will always find a way to get a gun, whether you are allowed to have one or not. Might as well even the odds a little, and let us keep our weapons. The Constitution guarantees our right to bear arms. The need in light of this massacre is not to take guns away from the citizens, but to find a way to keep weapons out of the hands of evil people.

As for me? If you break into my house, or threaten to harm my family, I have a bullet with your name on it.
Posted by Douglas V. Gibbs at 7:20 AM

If just one person in that building had had a gun, the carnage, the death toll copuld possibly have been halted. Just one person. Armed security even.

This incident just horrifies me. Those poor young kids, and their families. My heart breaks. (And yes, I DO have a heart.)

We have heavy gun restrictions here in the UK, since the carnage at a school in Dunblane, Scotland when Thomas Hamilton killed around 13 children and a teacher. After that, there was an almost wholesale ban on handguns. All those who held registered handguns had to surrender them to the authorities and the controls on ammunition were similarly tightened up.

Prior to that, there had been another rampage in Hungerford in the mid-eighties, when another 16 people were shot by a man (Michael Ryan) armed with an AK-47. After that incident all automatic firearms had been banned.

Since those two incidents, we have - thankfully -had no repeats of this. It may be because we ran out of weirdos, but I prefer to think that all those who may have been tempted to go on a rampage because of some perceived injustice or other simply are unable to, because the law prevents most people from having access to these weapons. You can still fire weapons, if you so desire, at special shooting halls, but the whole concept of a weapon being a tool of self-defence here is largely dialled out, because NO ONE is allowed a gun.

That is not to say that we do not have gun crime. Of course we do. In the UK at the moment, there is a tide of gun crime sweeping the black community, and several young men have been tragically killed. However, they have been killed by illegal weapons. If you possess an illegal weapon, the penalty is severe: perhaps 8 years in jail.

Meanwhile, because burglars do not expect the houses they burgle to have firearm inside, few use guns when burgling houses, and armed burglaries are thankfully rare.

That is not to say that the 'lone weirdo' cannot find a gun, but it does make it much more unlikely.

Those with guns tend to be career criminals, and career criminals generally do not want to draw attention to themselves by shooting unarmed individuals, as this is rarely a life choice you escape from scot-free.

Finally, although I do not know the exact figures, an alarming number of those killed in the US by guns are actually with their own weapons.

In the US, you have had many spree killing incidents, and you will have many more too. This is because there is a sort of copycat cachet about the whole thing that appeals to certain sad individuals who have not made any impression on society in more traditional arenas, such as sports or popularity at school (as was the case with Columbine). Not career criminals.

And as for the right to own a weapon being enshrined in the US constitution, I believe that the whole phrase is something like: '...the right to bear arms in defence of the militia...', rather than just a general right to carry a gun because you feel like it.

No doubt you will consider me a whinging leftie, but I more than happy for the individual to be banned from arming himself in peacetime if it means that the bulk of society is spared this kind of atrocity. The internet is more than enough of a voice for the disturbed individual. Let's not let him arm himself too.

Anonymous said...
This comment has been removed by a blog administrator.
3:44 PM

Anonymous said...
This comment has been removed by a blog administrator.
7:34 PM

It is just sad that in today's world a tragedy such as this is immediately siezed upon as a political opportunity (and both sides are guilty of this).

I weep for the future my kids will inherit!

Anonymous said...
This comment has been removed by a blog administrator.
7:44 AM

Anonymous said...
This comment has been removed by a blog administrator.
5:15 PM