According to MedicineNet.com Dyslexia is a "specific reading disability due to a defect in the brain's processing of graphic symbols. Dyslexia is a learning disability that alters the way the brain processes written material. . . The effects of dyslexia. . . vary from person to person. The only shared trait among people with dyslexia is that they read at levels significantly lower than typical for people of their age. . .The prognosis (outlook) for people with dyslexia is mixed. The disability affects such a wide range of people, producing different symptoms and varying degrees of severity, that predictions are hard to make. The prognosis is generally good, however, for individuals whose dyslexia is identified early, who have supportive family and friends and a strong self-image, and who are involved in a proper treatment program."

A common belief regarding Dyslexia is that the sufferers reverse letters, or change the letters in their mind when they attempt to process written information. In Dyslexia, this is not always true. However, in "Common Sense Dyslexia," getting things backwards and reversed is very common.

The Democratic Party is the first example of mass Common Sense Dyslexia known on the planet.

Okay, maybe I am being a little satirical (or perhaps cynical), here, but imagine if such a disability existed. It would explain a lot of the backwards actions and reversed thinking by the Liberal Left and the Democratic Party.

Democrat Pete Stark verbally assaulted Bush while debating the SCHIP veto, suggesting that President Bush was throwing money away into an "illegal war" and getting American Troop's heads blown off for the president's amusement. House rules prohibit personal attacks on fellow lawmakers, but that never stops the Democrats from their constant, malicious attacks of the Republican Party and President Bush's War Policy. Rather than condemning Stark's remarks, House Speaker Pelosi congratulated him for defending their attempt at sneaking yet another freedom-stealing piece of legislation through. And it is unbelievable that any American, much less a member of political office, would suggest that any president would willfully blow the heads off our troops, and enjoy it. The anti-military group of politicians is out of control, and their military-morale damaging rhetoric needs to stop. This is beyond reasonable, and borders on treason. By the way, the override vote did not work, and the SCHIP legislation remains but a socialist pipe dream for the Democrats. One more note, the SCHIP program, which would provide government sponsored health care for an estimated 10 million children in the United States that is in a situation where their parents can currently not afford the insurance, is a program that will precede systems such as a Universal Health Care plan, which, as you may know, in my opinion, is a failed policy in Europe and Canada, and will destroy our health care system as it is, and force you to participate in a government system whether you like it or not. No government should ever take away that kind of freedom. Understand, temporary health care paid by the government is sometimes necessary, but permanent dependence on such a system seethes with Marxism, and a loss of freedom. Democrats and Liberals (one and the same?) don't seem to understand this. Perhaps they suffer from Common Sense Dyslexia.

House Democrats on October 10th passed a resolution that recognizes as genocide the mass killings of Armenians by the Ottoman Empire during World War I. The resolution was idiotic to pass, not because it is not necessarily true, but because the timing was horrendous. The Democrats did not consider the current situation in the Middle East and how such a resolution would be perceived by Turkey, a nation that remains moderate enough in their Muslim Faith that they continue to allow the United States to use their country as a staging point for our dealings in Iraq and surrounding areas. Such a resolution could be disastrous to that capability. Sure enough, before the passing of the resolution, Turkey warned that "Turkey's ties with the U.S., already strained by attacks from rebels hiding in Iraq, will be irreversibly damaged if Congress passes a resolutions that labels the World War I killings of Armenians as genocide." Well, the resolution passed, and immediately afterward Turkey took steps toward a military operation in northern Iraq. And what is even more interesting is how Democrats are quick to accuse Islamic Expansionists from the Ottoman Empire of genocide nearly 100 years after the fact, but deny that Saddam Hussein committed such atrocities, or that Ahmadinejad plans to. There goes that Common Sense Dyslexia, again.

The liberal-minded thinkers over at Disney must be causing ol' Walt Disney to roll over in his grave. Radio Disney has decided to remove "God" from the 'Ten Commandments' movie ad because. . . well, actually, no reason was given, and it makes no sense since when someone watches the movie they will get plenty of "God" in it. Weird. Backwards. Common Sense Dyslexia.

In San Francisco some of the lawmakers came up with an interesting idea. The idea is to allow intravenous drug users shoot up under the supervision of trained personnel. The theory is that it will decrease overdoses, keep dirty needles off the street, and cut the risk of spreading AIDS and hepatitis C. Sounds noble, doesn't it? And, of course, these illegal drug users will be shooting up "safely" using yours and my hard-earned tax dollars. As one reader of SFGate said, "What's next? Giving them the drugs, too?" How about these people stop participating in a dangerous activity? They know it's dangerous. They know it's illegal. If they die from it, it's nobody's fault but their own. I feel for them, but the fix is not to make it easier to do what they do. Heck, send them to a church where they will help them break the habit. Don't assist them to continue it. Jeez. Common Sense Dyslexia again.

Sanctuary cities are cropping up all over the U.S., and these cities continue to break federal law without consequence. They order their police not to report illegal aliens (which federal law says is illegal), and they provide sanctuary for these illegal aliens in defiance of federal law, and endanger our nation because illegal immigration is also a National Security Issue. On October 16th the amendment SA 3277, sponsored by Sen. David Vitter (R-La.), was voted on. The amendment would deny federal "COPS" funding to cities who continue sanctuary policies for illegal aliens. The Democrats won the vote, and denied the amendment to pass. And while they were at it they pulled six Republicans across the aisle to assist in doing it. The amendment failed by a 52-42 margin. Backwards. Unbelievable. Common Sense Dyslexia. 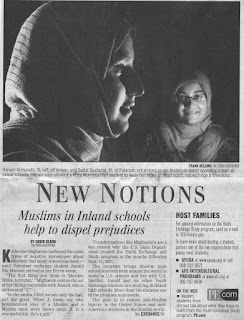 In the Inland Empire, which is the inland region I live in in Southern California, The Youth Exchange and Study Program, created after 9/11, brings Muslim high school students from around the world to study in U.S. Schools and live with U.S. families. More than 720 students are in the program nationwide. The idea is to reduce anti-Muslim feelings in the U.S., and students proclaim that their new Muslim friends are surprisingly wonderful people. I am sure they are, but that doesn't mean that all members of Islam are peaceful like these students coming here seem to be. These students are peaceful despite Islam, not because of it, and one wonders how many of those 720 students has ties to terrorist groups. Perhaps none, probably some, invariably many. It would be like bringing members of Hitler's Youth from Germany to mingle with our kids during the 1930's. Backwards thinking. Common Sense Dyslexia.

And would you like some evidence of what Muslim youths are capable of in our society? in Amsterdam a Muslim youth entered a police station and stabbed two police officers before being shot and killed by a third police officer. Now get this. In response, Moroccan-Dutch youths rioted in western Amsterdam where cars were set on fire and stones were thrown through the windows of a police station.

Oh, and by the way, to show how peaceful this religion of peace truly is, today in Pakistan Former premier Benazir Bhutto narrowly escaped a suicide bombing that shattered her homecoming procession and killed 126 people hours after she returned to Pakistan from exile pledging to fight extremism and promote democracy.

As I was writing this piece, I had a conversation about my theory of Common Sense Dyslexia with John Bootie, and he said there is a flaw in my theory. You see, in order to have backwards common sense (or Common Sense Dyslexia) liberals have to have common sense in the first place, and Mr. Bootie believes they don't. He also said, "I say they see perfectly fine and they think you and I don't see clearly. I don't have any doubt they know exactly what they're doing with the SCHIP and Turkey thing and the letter about Rush Limbaugh. The Turkey thing was to disrupt supply lines to our troops, for example." In other words, they knew full well that Turkey would react as they did, and that is the whole reason for the resolution.

Well, so much for my theory of Common Sense Dyslexia.

In the end, however, I do realize that Common Sense Dyslexia does not exist, and the members of The Left do not suffer from it. But my explanation may differ just a bit from John Bootie's. My explanation for their actions and words are simple and can be defined with a few words: Stupidity, Idiocy, Socialism, Marxism, and Anti-Americanism. 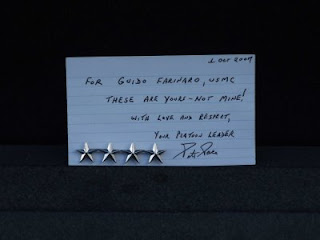 By the way, in a show of true patriotism, and love for his men, General Peter Pace
left his stars at the Vietnam Wall
in Washington D.C. for his men. Flag Gazer wrote a great post about it. The interesting thing is that same day he dropped off his stars at the wall, he stepped down as Chairman of the Joint Chiefs of Staff. In her post Flag Gazer wrote, "This act of leaving his stars for his fallen men should not surprise anyone who has listened to him, read his speeches and watched his interactions with his troops. This is a man whose core essence is Lt Pete Pace, who dedicated his entire life to honor those he led. As his ranks became larger and larger, in his heart he remained Lt Pete Pace. He remained a Platoon Leader."

I agree with her.

By the way, tonight's interview of Max Lucado has been Postponed to Tuesday, October 23rd, at 7pm Pacific Time/10pm Eastern Time.

Political Pistachio Radio Schedule of upcoming shows is as follows:

Saturday, October 20, Paul Ibbetson, Patriot Act Expert and the author of "Living Under The Patriot Act: Educating A Society."

Wednesday, October 24, Jason Robertson, Author of "A Love Beyond Explaining . . . an orphan's journey from rice to grits," will join us. Jason's heartfelt story begins during the war ravaged jungles of South Vietnam, from which he was rescued as South Vietnam fell to the Communists. 30 years later he returned to Vietnam in search of his roots. He will join us to tell his story. http://www.ricetogrits.com/

Saturday, October 27, John from Cuba Companioni fled Cuba as an exile during his childhood with his mother. They began their pursuit of the American Dream in New York City. John will join Political Pistachio on this date to tell his story.
Posted by Douglas V. Gibbs at 9:10 PM