A Thanksgiving Message about Self-Reliance 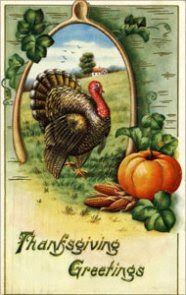 I call myself a Conservative, but I am registered as a Republican. The two terms used to be synonymous with each other, but not anymore. It seems that the long time hallmark of the Republican Party, self-reliance, is no longer a popular notion. In fact, it seems to me that people around the world have determined that it is in their best interest to sit back and wait for government to do something about whatever it is that bothers them. And if the government doesn't do anything, that is just fine, because somewhere there is an American charity that will chip in instead.

I believe American charities are a perfect example of the self-reliance culture that resides in the United States. I appreciate the charitable organizations, and I believe relief for the poor, or for those ravaged by natural disaster or war worldwide, is better supplied by private charities than some government bureaucracy. But what is interesting is that it is primarily Americans, for the most part, providing this kind of help around the world. Yes, I realize there are agencies from around the world that provide assistance where needed, but not nearly as much as American organizations do.

But I suppose that is the point, isn't it? Since 1997 the rate of global assistance by Americans has steadily increased 12.5 percent each year, and rose 20% last year. Isn't that fascinating? It is a perfect example of my point. Americans, despite the media's claim of the opposite, have recognized that government cannot fix all of the problems plaguing the world, and so our culture has worked through private organizations to do what government can't. We provide, privately, more for the world's needs when faced with disaster than any of the governments have provided.

And I think this trend is also evidence of how important cutting taxes is. Think about it. Lower income tax rates place more money in the pockets of Americans, who then in turn contribute more to charitable causes, not only because they have more money, but because of the further tax relief they will receive for such giving. In Europe, for example, as taxes have risen, giving has gone way down.

Basically, it is a culture of self-reliance that is able to give, and is willing to do so. It is the self-reliance of America that is able to dip a little deeper and reach out to helping our global neighbors. And hopefully, through the generous giving by self-reliant Americans, the rest of the world will take notice, and quit waiting around for government to take care of their ills, and become self-reliant themselves, and join American charitable organizations in spreading the surplus that results from said self-reliance.

I have been quite busy today. Here's some links to some of my other writings around the World Wide Web today:

Israel Criticized For Buying Pistachios Grown In Iran on Political Pistachio Too.

Giving Thanks on Thanksgiving on Carried By Christ.

A funny joke I pulled on Mrs. Pistachio years ago titled "Why Eating Turkey Makes You Sleepy" on Defender of the Blahs.

The Race Is On - Jim Gilmore for U.S. Senate on Political Pistachio Videos.

Giving Thanks (even during the storms of life) on Ox After Dark.

and of course this morning was my Thanksgiving Morning broadcast on Political Pistachio Radio.

And don't forget that Friday Night I often am a member of the panel on CIR Radio, and on Monday Nights I co-host the Andrea Shea King Show.
Posted by Douglas V. Gibbs at 1:37 PM