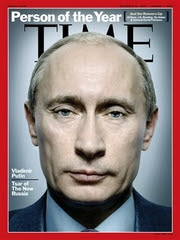 The Person of the Year as chosen by Time, I always thought, was supposed to be the person that most affected the world during the year in a positive way. In other words, tyrants with the goal of returning a nation back to the days of oppression against the citizens ought not be the choice.

Vladimir Putin is a former KGB operative that openly supports Iran, and continuously bashes The West. In my opinion, the man is still KGB, and we are in the infancy of the second Cold War. Essentially, Time Magazine is honoring Vladimir Putin for being anti-American. That's like the Dog Lovers of America honoring Michael Vick, the football player that got in trouble for dog fighting.

Putin is not the Person of the Year.

Al Gore seems to think he should be the Person of the Year. In fact, Al Gore has filed lawsuits alleging that the Time Magazine Person of the Year voting was tampered with (Florida all over again?). Gosh, I guess winning an Emmy, Oscar, and Nobel Peace prize for imaginary science using inaccurate numbers, models, and. . . well, refusing to recognize the obvious, wasn't enough. Al Gore wishes for one more undeserved honor.

You know, in my opinion, the Person of the Year should be the person that had the greatest positive impact on the world, and in my eyes, that person is General David Petraeus.
Posted by Douglas V. Gibbs at 9:53 PM