Can a T-Shirt Shoot a Bullet? 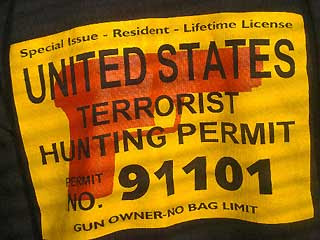 Did you hear about the kid being suspended because the image to the right was on his shirt? Apparently, the 14-year-old Pennsylvania schoolboy is fighting back after being sent to detention for wearing a T-shirt bearing the image of a gun in honor of his uncle fighting in Iraq. The school said they were concerned for the safety of the students. I understand the dangers of gang-bangers in school with weapons, and I understand their attempt to have a zero-tolerance, but please, this is over the top. What's next? Are they going to ban marriage? (yep, in the works!) Are they going to start teaching our kids to be gay? (ooops, they are trying that too!)

Yesterday, I took my grandson in for his immunizations, and the staff at the doctor's office gave me a questionnaire to fill out while waiting. The questions asked basic questions, and on most of them I put the words, "None of your business." The doctor, concerned by this, asked me why it was none of his business if any of the baby's immediate or not-so-immediate family members smoked or owned guns. Apparently, if I smoke the child will be dead before me, and if I own a gun, and the child comes over my house, they feel it is there duty to counsel me on the dangers of guns because as a gun owner I couldn't possibly be responsible enough to be safe with my weapons. After all, he said, the dangers of guns have become more apparent with these horrible school shootings of late.

I own twelve guns, and I have never been robbed. Many of my neighbors have been robbed, often while they were sleeping at night. My kids grew up around my guns, understand the weapons, know what they are capable of, and respect them because I taught them to respect weapons. I have never found the need to fire my weapon at an intruder, and even if an intruder did break into my property, his value for his own life would result in him fleeing, more likely, once he caught site of my loaded weapon aimed at him.

As for my opinion that we need students and teachers to be armed to stop such atrocities like the recent school shootings, did you know at that seminary massacre in Israel the terrorist gunmen were stopped by an armed student?

Gun Free Zones are dangerous for the victims because they have no way to defend themselves. All Gun Free Zones accomplish is enabling shooters more time to re-load. Law abiding citizens have the right to be armed. The criminal element, regardless of laws, will always find a way to arm themselves. Why should government take away the weapons of the citizens? Does the government, like the criminal element, like their prey unarmed as well? An armed person is a citizen. An unarmed person is a subject.

The Second Amendment is there for a reason.
Posted by Douglas V. Gibbs at 1:05 PM