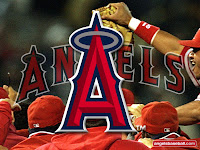 We planned to get on the road by 6:00 AM, but I didn't pull out of bed until 5:45 AM, and after my shower, and awakening Mrs. Pistachio, while I was checking my e-mail she went back to sleep. We finally got on the road at 7:20 AM.

Where were we going?

Mrs. Pistachio had the fantastic idea of making the five hour drive to Tempe, near Phoenix, to attend Arizona/Cactus League Spring Training Baseball, and of course the tickets she procured were for my beloved Angels of Anaheim, a team I have followed since I was old enough to understand baseball in the mid-1970's.

So we drove five hours through the empty desert.

We arrived in Tempe at 12:20 PM, just in time for our 1:05 PM gametime. Unfortunately, the line to get into Diablo Stadium's parking lot was horrendous, and we missed half of the top of the first inning.

So after purchasing a foot-long hot dog, a Philly Cheese Steak sandwich that, though very tasty, was nothing like the real thing in Philadelphia, and a couple of sodas, we located our seats in the fifth row from the field, just a little bit beyond first base.

I was disappointed that we didn't get there as early as I hoped we would, because I missed out on prime opportunities for player autographs. It's not like I don't have many sports autographs, but it is always nice when you can gain some from players that you enjoy watching season in and season out. 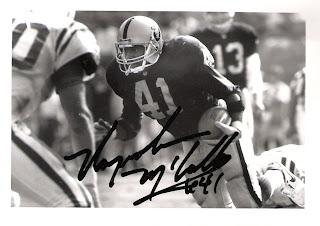 I stated, I already have a number of autographs. In the late nineties I got Napoleon McCallum's Autograph (NFL Raiders-pictured left), and a few years ago Darin Estad's of baseball's Angels of Anaheim on a baseball while he was on rehab with a local Single-A club. I have a few others on baseball cards as well, like Dave LaRoche (of whom my mom went to high school with), Mike Darr (of whom my brother went to high school with), and a couple other players that I happened to come across like Prince Fielder, Todd Greene (when he was a minor leaguer), and Lendell White/USC Football.

The game was fun, the Angels won, and I got to see the new Angel Torii Hunter knock a homer, as well as one from Casey Kotchman and two home runs from Vladimir Guerrero. 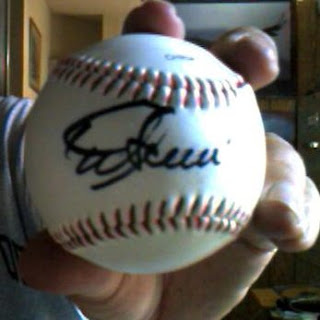 After the final pitch Mrs. Pistachio sat back and watched me with baseball and pen in hand, hoping for an autograph from somebody. . . anybody. Problem is, the stars of the team departed after the sixth inning and the bench players and invites played the last three innings. However, I waited patiently, hoping to gain a memory in the form of an autograph - - - and it came from an unexpected source. Mike Scioscia, Manager of the Angels, signed my baseball. I was grinning from ear to ear, and the wife says the trip was worth it just by watching my reaction.

After the game we got together with a fellow blogger (and his wife and daughter) who lives in the area, Cary Cartter. Dinner was great, the conversation was lively, and the Cartter family got a kick out of my wife and I and our now famous conversational routine that some listeners of Political Pistachio Radio compare to "Ricky and Lucy."

We departed at 7:20 PM, and returned home at twenty minutes after midnight. 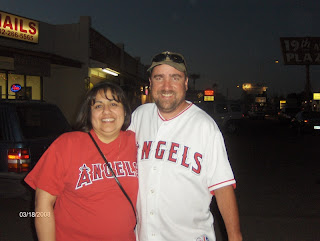