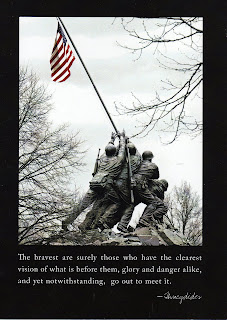 (photo thanks to De'on)
Tonight on Political Pistachio Radio the guest was David E. Meadows, author of The Sixth Fleet series of books, and author of the just released "Final Run." During the show the subject of supporting the troops, and not allowing the travesty of anti-war protestors demeaning our troops came up. This Budweiser advertisement - commercial of an airport erupting into applause as soldiers came home and walked through the airport came to mind, and brought tears to my eyes as I discussed it:

After my show ended Joshua P. Allem came on, and he read the following (which I have seen before, but for some reason tonight it really got to me:

President Bush did make a bad mistake in the war on terrorism. But the
mistake was not his decision to go to war in Iraq.

Bush's mistake came in his belief that this country is the same one
his father fought for in WWII. It is not.

Back then, they had just come out of a vicious depression. The
country was steeled by the hardship of that depression,
but they still believed fervently in this country. They knew that the
people had elected their leaders, so it was the people's duty to back

Therefore, when the war broke out the people came together, rallied
behind, and stuck with their leaders, whether they had voted for
them or not or whether the war was going badly or not.

And war was just as distasteful and the anguish just as great then as
it is today. Often there were more casualties in one day in
WWII than we have had in the entire Iraq war. But that did not matter.
The people stuck with the President because it was their
patriotic duty. Americans put aside their differences in WWII and
worked together to win that war.

Everyone from every strata of society, from young to old pitched in.
Small children pulled little wagons around to
gather scrap metal for the war effort. Grade school students saved
their pennies to buy stamps for war bonds to help the effort.

Men who were too old or medically 4F lied about their age or condition
trying their best to join the military.
Women doubled their work to keep things going at home. Harsh
rationing of everything from gasoline to soap, to butter was
imposed, yet there was very little complaining.

You never heard prominent people on the radio belittling the
President.
Interestingly enough in those days there were no fat cat actors and
entertainers who ran off to visit and fawn over
dictators of hostile countries and complain to them about our
President. Instead, they made upbeat films and entertained our
troops to help the troops' morale. And a bunch even enlisted.

And imagine this: Teachers in schools actually started the day off
with a Pledge of Allegiance, and
with prayers for our country and our troops!

Back then, no newspaper would have dared point out certain weak spots
in our cities where
bombs could be set off to cause the maximum damage. No newspaper would
have dared complain about what we were
doing to catch spies.

A newspaper would have been laughed out of existence if it had
complained that German or Japanese soldiers were
being 'tortured' by being forced to wear women's underwear, or
subjected to interrogation by a woman, or being scared by a
dog or did not have air conditioning.

There were a lot of things different back then. We were not subjected
to a constant bombardment of pornography,
perversion and promiscuity in movies or on radio. We did not have
legions of crack heads, dope pushers and armed gangs
roaming our streets.

No, President Bush did not make a mistake in his handling of
terrorism. He made the mistake of believing that we still had the
courage and fortitude of our fathers. He believed that this was still
the country that our fathers fought so dearly to preserve.

It is not the same country. It's not as bad as Sodom and Gomorra yet,
but it's now somewhere between Sodom and Gomorra and the
land of Oz. We did unite for a short while after 9/11, but our
attitude changed when we found out that defending our
country would require some sacrifices.

We are in great danger. The terrorists are fanatic Muslims. They
believe that it is okay, even their duty, to kill anyone
who will not convert to Islam. It has been estimated that about one
third or over three hundred million Muslims are sympathetic to
the terrorists cause... Hitler and Tojo combined did not have nearly
that many potential recruits. So... We either win it - or lose it -
and you ain't gonna like losing.

America is not at war. The military is at war. America is at the
mall.

Finally, my good friend, Jim Stewart, author of The Angel From Vietnam, sent me this gem:

If you're a Democrat...........explain this disenfranchisement with these super delegates, many who have been bought and paid for by Obama and Hillary. If it takes hundreds of thousands of people to vote in one state to determine the outcome of a couple hundred delegates, how can one individual super delegate off set the vote of thousands when it comes down to the end? Here are the stats....

Many of the superdelegates who could well decide the Democratic presidential nominee have already been plied with campaign contributions by Barack Obama and Hillary Clinton, a new study shows.

"While it would be unseemly for the candidates to hand out thousands of dollars to primary voters, or to the delegates pledged to represent the will of those voters, elected officials serving as superdelegates have received about $890,000 from Obama and Clinton in the form of campaign contributions over the last three years," the nonpartisan Center for Responsive Politics reported today.

About half the 800 superdelegates -- elected officials, party leaders, and others -- have committed to either Clinton or Obama, though they can change their minds until the convention.

Obama's political action committee has doled out more than $694,000 to superdelegates since 2005, the study found, and of the 81 who had announced their support for Obama, 34 had received donations totaling $228,000.

Clinton's political action committee has distributed about $195,000 to superdelegates, and only 13 of the 109 who had announced for her have received money, totaling about $95,000.

AND THE REPUBLICANS STEAL ELECTIONS????
Posted by Douglas V. Gibbs at 9:24 PM