Memorial Day Tribute to Heroes, and Audio of Interviews with attendees of Anti-Illegal Immigration Rally in California

Memorial Day means more than bar-b-qued hamburgers and hot dogs. It is more than just a day off from work. Memorial Day is a time to thank those who have sacrificed their lives for this nation, and a time to thank those who are currently laying it all on the line everyday to keep this nation safe. These men and women are most deserving of our deepest respect and gratitude for all they have done on behalf of our great country.

It is my sincere hope that everybody takes the time to pay tribute to those heroes who have paid the ultimate sacrifice while protecting our freedom, and also recognize the tremendous sacrifices that our Veterans have made and our active duty troops are making everyday.

In fact, there are only two words that I can say that truly relay how I feel. They are simple words, insignificant by themselves, but filled with emotion and honor when placed together and delivered to a member of the United States Military.

Tonight on Political Pistachio Radio we will pay tribute to those fine members of the military, past and present, living and dead. I encourage the veterans that read this site and listen to the show to call in so that we may thank you personally.

The men and women that protect this nation serve in many more ways other than the military. Our Border Patrol is also an agency tasked with keeping us as a nation safe, not only from illegal immigrants who have broken the law to be here and are tapping into a system they have neither contributed to, nor have the legal right to access, but the Border Patrol also protects us from members of enemy Islamic factions and Mexican drug cartels. One out of three persons crossing the border along the San Diego county line are of Middle Eastern descent. The Drug Cartels in Mexico are at war with the government and each other, and that war is attempting to spill over into this country. The Border Patrol is our line of defense against both of these dangers. Unfortunately, our government, which is fast becoming a judicial oligarchy, has determined that if Border Patrol Agents do their job, their actions are punishable by prison.

Two Border Patrol agents, Ignacio Ramos and Jose Compean, attempting to interrupt a cross-border drug smuggling operation, fired their weapons in self-defense at an admitted illegal alien, drug smuggler, Osbaldo Aldrete-Davila. The smuggler managed to escape across the border into Mexico, but he left his vehicle, loaded with more than 700 pounds of marijuana. It was another good bust. Rather than be congratulated for doing their job, the Border Patrol agents were charged with attempted murder, indicted, placed under house arrest for eight long months. The two agents were later sentenced to 11 and 12 years in federal prison, respectively, on charges of assault with a deadly weapon and for violation of the drug smuggler's civil rights. They remain in prison serving their unfair sentence that President George W. Bush could pardon, but won't because of his globalistic position, and lack of cajones against the liberal left which would lambaste him if he so dared.

Last Friday I attended a Free Ramos and Compean Sidewalk Rally in Irvine, California near where First Lady Laura Bush was autographing copies of the book she authored with Jenna Bush, "Read All About It!" While I was there I interviewed a number of the folks holding up signs and waving American Flags in support of our unjustly jailed Border Patrol Agents, Ramos and Compean. Tonight on Political Pistachio Radio, after the tribute to our American Military Heroes, past and present, I will play for you the audio of those interviews. Don't miss this broadcast! This will be a show you will remember for a lifetime.

Below are photos I took from the Rally. The first is of the line waiting to meet Laura Bush. The last picture is of a woman born in South America who declares proudly she is an American, and she is the final, stirring interview you will hear tonight. 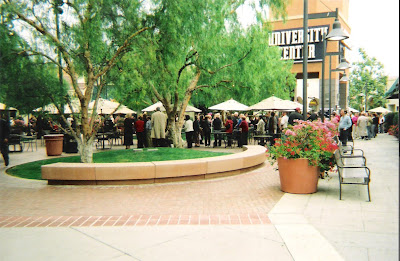 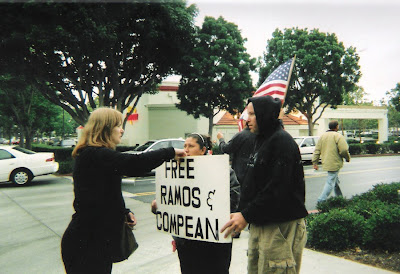 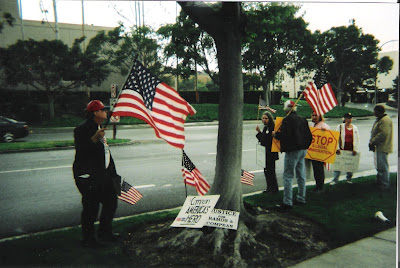 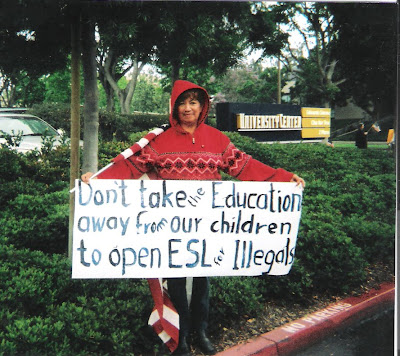 Cross-Posted on Heading Right, and various other members of the Political Pistachio Network.
Posted by Douglas V. Gibbs at 9:10 AM