Politics of a Scarf: From Rachael Ray and Dunkin' Donuts to Sandra Tieger and Bondi Bottleshop 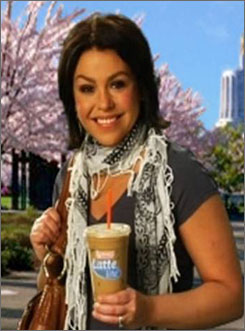 The other night on a Blog Talk Radio Show, Jenn's Political Jungle, the issue of the "keffiyeh kerfuffle" came up. A keffiyeh (also known as a shmagh, shemagh or yashmag, a ghutra, a hatta or a masha) is a traditional headdress of Arab men. It is normally made of a square of cloth ("scarf"), usually cotton, folded and wrapped in various styles around the head. It is sometimes worn loosely draped around the back and shoulders. The keffiyeh is almost always of white cotton cloth, but many have a checkered pattern in red or black stitched into them. The plain, white keffiyeh is most popular in the Gulf states, almost excluding any other style in Kuwait and Bahrain. The black-and-white keffiyeh is most popular in the Levant.

Recently, Dunkin' Donuts pulled an online advertisement featuring Rachael Ray wearing what looked to be a keffiyeh because it was believed Ray wearing the scarf offered symbolic support for Muslim extremism and terrorism. The official explanation for pulling the ad was that they feared there may exist "the possibility of misperception detracted from its original intention to promote our iced coffee."

One of the critics included respected conservative commentator Michelle Malkin. Michelle complained that the scarf wrapped around Rachael Ray looked like a kaffiyeh, the traditional Arab headdress. Specifically, Malkin commented that the kaffiyeh "has come to symbolize murderous Palestinian jihad. Popularized by Yasser Arafat and a regular adornment of Muslim terrorists appearing in beheading and hostage-taking videos, the apparel has been mainstreamed by both ignorant (and not-so-ignorant) fashion designers, celebrities, and left-wing icons."

I agree that this is what the kaffiyeh has come to represent, and that the Islamic intention to normalize Islam in our society with subtle actions such as inserting kaffiyehs into our world of fashion may be the case in this situation. However, is it possible that Rachael Ray donned the scarf for another reason? Is it possible that there was no sinister intention, and this is simply a misunderstanding, or a failure to understand the political implications of a scarf?

While I am determined be a part of the effort to stop the Islamization of America, I also recognize the danger of the conservative right having a knee-jerk reaction over every little thing that pops up. Have we been battling political correctness so fervantly that we have become victims of it ourselves? Are we going to freak out every time the slightest little thing comes up that may be construed as pushing an agenda?

It goes back to what I was taught as a young man. Be big on the big things, and little on the little things. I fear that though there may be some credibility to Michelle Malkin's argument, and the blog-wide commentary regarding this, we are being too big on this small issue that may simply be a case of Rachael Ray wearing the scarf because she thought it looked nice.

Here's a case in point:

A woman wore a similar scarf to work in Australia recently. She stated that, "I thought it was a nice scarf, a cowboy scarf. I thought: 'It's black and white, no-one will say anything to me because that's all we can wear [with our work uniform]'."

After being confronted, Sandra Tieger, 20, said she began to feel like a terrorism supporter following the reaction to her wearing the black and white scarf to work. Ms. Tieger had "no idea about the politics" when she bought the scarf at the Tree Of Life store.

"A Palestinian customer came up and asked me if I'm wearing this scarf as a fashion statement or for political reasons.

"I had no idea what he was talking about because I don't follow politics at all. I just laughed it off.

"Two days later he called and complained about it."

The meaning of the scarf is apparently being watered down by the popularity of it as a sylish accessory. But the point here is, Sandra Tieger didn't wear the scarf as a means of supporting terrorism, no more than Rachael Ray did, I feel. Sure, I suppose it is possible Rachael Ray knew full well what she was wearing, and did so out of solidarity with the Islamic Jihadists - but why is it the conservative right jumped to that conclusion without knowing all of the facts?

Like I said earlier, I recognize Islam's attempt to inject their culture into ours as a means of normalizing it in our society, and we need to be on guard - but at the same time, I think we need to be a little bit reasonable, and not form a witch hunting party everytime something smells a little fishy.
Posted by Douglas V. Gibbs at 10:50 PM