Obama Suggests GOP Will Use Race To Scare Voters 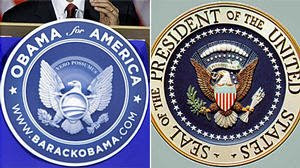 Obama said, "We know what kind of campaign they're going to run. They're going to try to make you afraid. . . He's young and inexperienced and he's got a funny name. And did I mention he's black? . . . That old stuff just divides us."

Interestingly, the only ones bringing up the fact that Obama is black is, well, his campaign and his supporters.

And honestly, I don't care what his ethnicity is. In truth, it all comes down to the issues.

Obama voted against banning partial birth abortion. I don't care where you stand on the abortion issue. Common sense dictates that if a child is slated to be born, but is terminated before the child has a chance to pass through the birth canal, and would have survived easily outside the mother, it is straight-out murder.

He voted "No" on notifying parents of minors who get out-of-state abortions. Is there any parent of a teenage girl that can tell me that that is fine with them? I doubt it.

He wishes to pull out of the war zone as quickly as possible. Granted, he is too inexperienced to realize a full pull-out is not realistically possible that quickly - the time to remove even a portion of the equipment will take a formidable amount of time. But my concern is not whether or not he is capable of pulling out of the region quickly, or incrementally. My concern is the message it sends to the enemy. Islamism will see a retreat as a weakness, and will respond with terror. What fascinates me is Obama is so urgent to meet with the leaders of the enemy, yet refuses to meet with General Petraeus.

He supports Universal Health Care, which has been a proven failure in Britain and Canada. And I don't care how you try to slice it, government funded Health Care falls under government control, and such systems are failures, and have been proven to be failures over and over again. This does not mean I think the current system of private insurance here in America is wonderful, but to replace a problematic system with a system that has a larger potential for failure is not the answer to this problem.

He supports granting driver's licenses to illegal aliens, as well as extending welfare to them. What part of illegal, and "not a citizen," does this idiot not understand?

And did I mention that from the time Barack Obama was sworn in as a U.S. Senator he has logged in 143 days of experience? Would you hire a manager with only 143 days of experience if you were a business owner? And this guy, with his inexperience (and yes, he said we'd claim he's inexperienced) wants to lead the greatest nation on Earth? I don't care about scaring anybody - it is just a fact - he has 143 days of Federal Political experience and I don't want a president trying to learn on the job.

And this is only a few of the issues. If you learn all about him you realize the man's politics are more in line with Karl Marx's than the U.S. Constitution.

But, since at the beginning of the post I brought up the fact that he claims to be the first black presidential candidate, let's touch on that for a moment.

Senator Obama will not be the first African-American president as he claims. He will be the first Arab-American president if he is elected. The Senator's background is: Caucasian from his mother [and] Arab-African from his father. The Kenyan Obamas are listed in the Kenyan census as Arab-African, not as Tribal 'Black' African. His father's great great grandmother was a Tribal African.

Therefore by ethnic lines the Senator is 50% Caucasian, 43.75% Arab, and 6.25% Black African (from where the Senator gets his skin pigmentation).

The Arab press has made much of the Senator's Arab heritage, but luckily for Senator Obama, American voters don't read the Arab press! However, key financial backers like the Arab "Americans" Rezko and Al-Sammarae, and the Iraqi Auchi do, and the money rolls in.

In Dreams From My Father, his autobiography, Obama confessed to concealing his white heritage in his youth.

Has Obama been concealing his Arab heritage as an adult?

Fascinating how Obama mentions his "blackness" about every chance he gets, but fails to mention that he is mostly white and Arab. Who's the one using race in the campaign, Barry? The GOP? Or you?

Mr. Obama, you are wrong about the GOP trying to scare voters by trying to point out you are black (or so you say you are), or by pointing anything else out. The GOP doesn't have to try to scare the voters in regards to you. The facts do that on their own (or will if the biased mainstream media actually allows themselves to report the facts).
Posted by Douglas V. Gibbs at 10:29 PM