Playing With The Enemy - Gary W. Moore and Toby Moore on Fox Sports 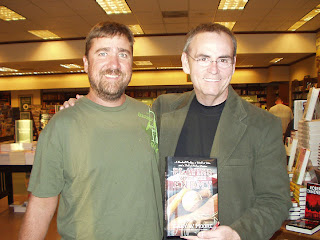 Those of you that are long time readers and listeners of Political Pistachio know Gary W. Moore, the author of "Playing With The Enemy." He has been on Political Pistachio Radio four times, and some of my listeners have won signed copies of the first edition of Playing With The Enemy on my show. A movie based on the book is currently filming, and should be released during the first quarter of 2009.

The book is about Gary's father, a baseball phenom caught up in World War II, and eventually tasked with guarding German U-boat prisoners of war. During that time of guard duty, the Americans teach the Germans the American game of baseball. The story is about shattered dreams, and finding what the meaning of life truly is.

Gary W. Moore, and his son, Toby Moore (who will be playing the lead role in the upcoming major motion picture based on the book) will be on The Best Damn Sports Show, Period on the Fox Sports Network on Friday, June 27.

On the show Gary will discuss the book and movie.

Check it out on the Fox Sports Network at 11:00 PM in most markets.

Oh, and if you want to listen to my past interviews of Gary on my radio show, the links are below: