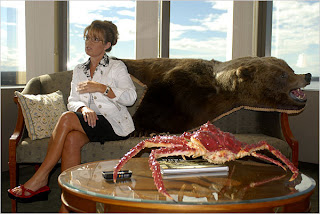 Many Conservatives are proclaiming that Sarah Palin should run for President in 2012, and that she would be a shoe-in to win.

Realize that in 2012 there will be a crowded field of Republicans, and they will range from moderates to Conservatives without a doubt.

Since Palin recieved so many attacks about her experience (while Obama didn't with less experience) it would seem reasonable that if she desires to run on a national ticket she ought to secure some "Washington" experience.

Considering that the sorry piece of fodder, Ted Stevens (if he pulls off the win - which is looking bleak), will probably lose his Senate seat anyway as they cart him off to prison, many folks think that Palin should enter the special election for that seat (if Stevens was somehow able to win that seat back) and get some "Senate Experience." Then what would the media have to say about her experience? Governor and Senator - with more Senate experience by then than Obama had going into this last race.

Personally, I think the Liberal Left fears that possibility.

Some Conservatives have claimed that they don't want Palin in the Senate. They are afraid that her appeal, being the candidate that can relate to the average American, will be diminished by allowing the sludge of Washington to flow through her veins.

But, I don't think Stevens will win the election, so "Senator Palin" will probably not happen. I am surprised the felon even ran for office. But that is fine. Governor Palin, with more governorship experience, will be fine. After all, Mitt Romney and Bobby Jindal are governors too - though from more populous states - and they seem to already be the front runners for the presidential run in four years.
Posted by Douglas V. Gibbs at 2:44 AM