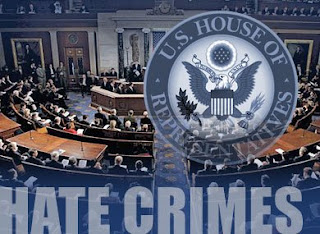 With full control over the Congress by the Democrats, they are trying to push through every vile law that they can muster. One such piece of legislation is H.R. 1913, the federal "Hate Crimes" bill. If this freedom killing leglislation becomes law it will give the incentive of federal funding to local and state law enforcement agencies to prosecute cases involving perceived attacks against sexual orientation, gender identity, or disability. This adds to the current law enacted forty years ago which limits federal jurisdiction over hate crimes based on race, color, religion, or national origin.

HR 1913 also lifts the requirement that the attacked victim must be engaged in a federally protected activity for it to be a federal hate crime.

Crimes motivated by race, religion, national origin, gender, sexual orientation, gender identity, or disability are impossible to prove. Motivations are something that only the owner of the motivation true knows. However, this potential hate crimes law would give the government the right to make a determination on the motivation based on their opinion. In other words, thought crimes, punishable by Big Brother.

However, the insidious nature of this proposed law goes deeper than that. Potential victims can claim that any action that is perceived to fall in these catagories is a hate crime. Simply stating your opinion can land you in jail, if you are not careful what you have an opinion about. In other countries, where similar hate crime laws have been passed, pastors and Christians have been jailed and fined for their adherence to biblical values, and daring to voice such beliefs, even inside the four walls of the church.

The American version of the Hate Crimes laws we are seeing appear globally threatens the rights of Christians, and dangerously goes against the limitation against the government infringing on the free exercise of religion as guaranteed in the first amendment. H.R. 1913 gives protected legal status to perverse behaviors, and makes it criminal to have an opinion contrary to those behavioral deviations. The people targeted to be protected by these hate crimes laws are the same people who spew hate at Christians, and about Christianity, regularly. In short, this is saying that after Proposition 8 passing in California it was perfectly legal for someone to hit me in the side of the head with something they threw at me while I was driving through West Hollywood with a "Yes on 8" sticker on my truck, and it was perfectly acceptable for members of the Gay Agenda to wait on the sidewalk of my church and pound their fists on my hood and windows as I departed from church on a Sunday morning while they used profanity and called me a "hater," but under this new law, in such a confrontation, if I dared to open my window and say "Homosexuality is a sin" I could be fined and jailed for the emotional damage I caused the person for daring to say such a thing.

This bill, HR 1913, also enables double jeopardy, which is unconstitutional. It will allow, if passed, people who were found innnocent of a hate crime in a state court to be reprosecuted in federal court. The argument in support for undermining the Constitutional safeguard against double jeopardy is that "the federal hate crimes bill serves as a vital safety valve in case a state hate-crimes prosecution fails." This runs contrary to the constitutional presumption of innocence, and singles out a single group to be pursued by the courts, namely Christians and those in support of traditional marriage. In essence, the accused is guilty first, and if the state courts don't get it right, they'll be sure to nail the accused in a federal court. In the meantime, as this law seriously limits the freedoms of the group that supports traditional family values, the opposition to traditional views is free to spew any hate they desire without even a blink of an eye turned against them. Fear that the slightest word or action may make someone upset will silence all opposition to the homosexual behavior, an insidious tactic used in the past many times by tyrannical governments and agendas to silence the opposition by force.

A crime is a crime, and with sufficient evidence, a crime can be proven as such. State, or federal government, determination that "motivation" is a crime enables the government to jail and fine based on their opinion of whether or not a crime was motivated by thoughts that cannot be proven.

The bill, H.R. 1913 has passed the judiciary, and the House of Representatives. Only the Senate stands in its way, and the probability of it passing is high.