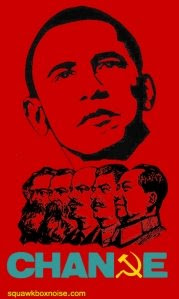 ". . . the American decent into Marxism is happening with breath taking speed." - Pravda.

The trajectory of America has been changed. Obama has changed our path away from national optimism, and American exceptionalism. Barack Obama is centralizing the Federal Government, which in turn stifles the individual's drive to thrive, and destroys the free market system of Capitalism. Genuine hope has fallen victim to Obama's policies of out of control government spending, a big government intrusion upon the private sector, and massive taxation disguised as saving the planet in the form of Cap and Trade. He plans to overhaul the tax code which will create business uncertainty. His massive spending is poised to trigger runaway inflation. And the federal government has begun the nationalization of banks, the auto industry, and the credit card industry (to name a few). We are witnessing the largest expansion of government ever, and it is happening so fast, even the Russians are surprised.

In the coming months the Obama Administration plans to hit us with a trillion dollar energy tax in the form of Cap and Trade, which will devastate the energy industry, and punish the same people he promised a tax cut to with increased energy costs that will eventually affect everything - forcing prices up in all corners of life's expenses. In the coming months the Democrats plan to rewrite our nation's labor laws which will devastate what is left of our dying economy. And the crown jewel of it all is his precious health care plan that will essentially nationalize health care, destroying the private leg of the industry, and will create a system that will wind up rationing health care, and destroying the innovation America is so proud of in the medical industry.

Interestingly, when it comes to Obama's drive for health care legislation, like with his other policies, a rush notice has been put on it. He has proclaimed that health care reform must be accomplished by the end of the year, or else it won't get done. Obama believes if we don't get socialized health care passed now, it will become a missed opportunity. His reasons for the rush order is that escalating prices may make it impossible to implement such a system later.

Obama's reasons for rushing this through are all lies. His reasons for rushing through health care legislation is the same reason he is rushing to get all of his other policies in place as quickly as possible. Obama knows that his health care bill will draw a fight, and that his policies must be put into place quickly before a proper opposition can be mounted. Obama wishes to cram through as much socialism as he can before the American People truly realize what he is up to. He needs to hurry because, as has happened historically, the opposing party stands to pick up a lot of seats in Congress during the next election. In other words, he has only a year and a half to get his policies in place before the Republicans pick up a whole slew of Congressional seats in 2010. He knows that reversing the damage he is doing will take a lot longer than implementing it, and if he can get all of his Marxist policies in place fast enough, America will not be able to recover for generations, if ever.

The Largest Expansion of Government Ever - The Heritage Foundation
Posted by Douglas V. Gibbs at 12:31 AM