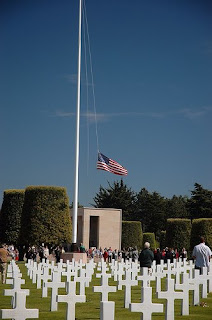 Next weekend the 65th anniversary of the D-Day liberation of France from the Nazis will be celebrated. In the planning of the event, despite the fact that she represents the history of the war, and was Queen of 22,771 soldiers buried there, the Queen of England was not invited. Perhaps Obama and Sarkozy didn't wish to be upstaged by royalty.

Why leave out any heads of state, or figurative heads? Why not invite everyone? That's what Jacques Chirac did for the 60th anniversary of the Normandy invasion. It is the proper thing to do. If they choose to decline, fine, at least they were invited.

Obama's choice of location for delivering a D-Day speech at Buchenwald is politically motivated, and apparently not inviting the Queen to Normandy is politically motivated as well. If the reason for not inviting The Queen to an event celebrating a major turn in World War II, and to honor heroes killed defending freedom, is indeed for a political reason, this is no the place for such politicizing.