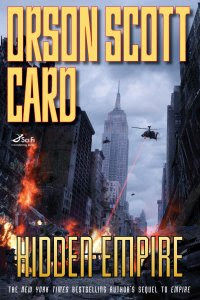 New York Times bestselling author, Orson Scott Card, will be the guest on the Political Pistachio Radio Revolution on a special Tuesday Night edition of the renowned Internet radio program. The interview will coincide with the release of Card's latest book, Hidden Empire.

Hidden Empire picks up where "Empire" left off, revisiting a near future world where America is an imperial tyranny, and a political scientist has taken control of the presidency.

In addition to the book, we will also be discussing with Orson Scott Card:

- The link between extremism and the seeds of war

- How war is instigated

- The danger of Democracy

- The concept of charity

- The role of the national media elite

- The future possibilities for peace

- The reality of America's future

Join us for this explosive interview Tuesday night at 7pm Pacific, 10pm Eastern, at BlogTalkRadio.com/PoliticalPistachio.
Posted by Douglas V. Gibbs at 3:08 PM