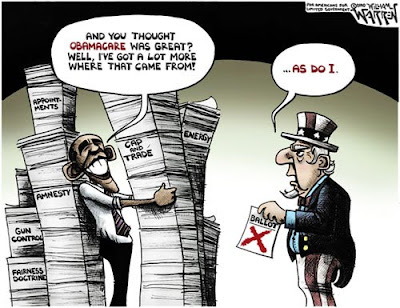 President Barack Obama and the Congressional Democrats have achieved the Holy Grail. They did what every progressive since Teddy Roosevelt has been trying to accomplish in America. They have finally made a reality federal intrusion into the Health Care and Health Insurance industries. They were willing to bribe their own members of their party, lie about the provisions in the bill, and go through with the-act-of-idiocy despite the fact that the American People was, and still is, overwhelmingly opposed to the legislation.

The price for the Democrat's incomprehensible expansion of the scope and breadth of the federal government is an electoral landslide for the GOP in November. Knowing that their defeat is on the horizon, the Democrats are going into overdrive, ready to pound every other hard left socialist program they can into place. Heavy regulation of the financial industry that will all but destroy the capitalistic nature of the system is on the barbie right now, while Cap and Trade and Amnesty waits in the wings. It is time to slam the pedal to the metal, as far as the Democrats are concerned, because they are figuring the Republicans won't be able to fix the damage before the Left gets back into power, and by then the revision of history will hail Obama as a hero, just like his fascist-communist hero, Franklin Delano Roosevelt, is regarded.

The Democrats have bullied the automobile industry, are bullying the health insurance industry, and now are working on bullying Wall Street. They blame these industries for our economic woes, even though it is government intrusion into these industries that put us into this mess in the first place. Then, after November, when the economy further tanks as expected from all of these liberal policies, the Democrats will do to the GOP Congress as they did to Bush, and lay all of the blame for the tanking economy on them, and the amnesiac voters will vote the Democrats back into office again. It is a deadly cycle that will keep spiralling worse and worse out of control until either we turn this mess around and head back in the direction of the original intention of the U.S. Constitution, or the entire nation collapses and we become nothing more than a footnote in history, thanks to the destructive policies of the liberal left.

I believe America's best days are ahead of her - but to reach those days we must remove the Left from power, and reverse the damage they are causing. . . a reversal process that unfortunately could take decades to accomplish if the Democrats go down fighting, and if progressives continue to infest the Republican Party as well.