Separation of Church and State: Christine O'Donnell was right, and the Law Students were Wrong 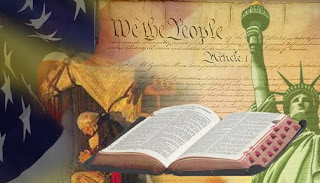 Christine O'Donnell is running for the U.S. Senate in Delaware as a Republican candidate. From the moment she surprised liberal Republican Mike Castle by upsetting him in the Republican Primary, O'Donnell has been the recipient of attack after attack by the Left. The attacks have been echoed by establishment Republicans, in an attempt to label O'Donnell as unelectable. Fact is, she is not only electable, but she has the political establishment in both parties nervous. In fact, as Election Tuesday approaches, O'Donnell is experiencing a surge in the polls. The Leftist attacks are not only failing to hurt O'Donnell, they may even be helping her out.

Chris Coons has backed out of the final two debates, Obama and Biden felt the need to help Coons and appeared in Delaware to stump for him, and in that Monmouth University poll that now has O'Donnell within 10 points of Coon, Christine O'Donnell is actually winning independents 47% to 42%. As with the rest of the country, the citizens of Delaware recognize the wrong direction the Democrats are taking us, and the danger of the existing political establishment of professional elitists. In fact, many of those fed up people are Democrats who are not getting from the Obama administration what they expected. As a result, many of these Democrats will be voting Republican, or they just aren't going to vote at all. This means that it is very feasible that Christine O'Donnell may pull the big upset. And remember, those polls tend to have a leftward lean, so it is very possible that Christine O'Donnell is within four or five points, or better, with Coons. And it is the fault of the Democrats, because they have turned off the voters with their unrelenting attacks. The people are asking themselves, "If O'Donnell is everything they say she is, then why spend so much time trying to discredit her? If she is so unelectable, why do they act as if she is a great danger to them?"

One of the latest attacks, however, is the one that I believe may put O'Donnell over the top. The episode occurred at the Widener University Law School debate where O'Donnell questioned the presence of "separation between church and state" in the U.S. Constitution. She asked where the term is located in the Constitution, and the liberal student body and moderator laughed because they erroneously believe that the First Amendment imposes a separation between church and state. This episode arose when Chris Coons, loyal to his Democrat liberal teachings, argued that the Constitution does not allow public schools to teach religious doctrine.

O'Donnell, despite the laughter of the audience, continued by saying, "Let me just clarify, you are telling me that the separation of church and state is in the First Amendment?"

The liberal left believes the establishment clause is the foundation of the separation between church and state, and that the courts have supported that belief with their rulings. In their circle the consideration is that the First Amendment restricts government promotion of religion, and protects a secular government from any religious influence. This belief arises from a misunderstanding of a letter from Thomas Jefferson, who was not even a participant in the Constitutional Convention, to the Danbury Baptists of Connecticut.

The audience, of course, went a step further with their laughter not because of their argument against the conservative notion that liberals have the establishment clause wrong, but because they genuinely believed Ms. O’Donnnell did not know the "complex principles of constitutional law which teaches separation of church and state is derived from the First Amendment."

The First Amendment was created to protect religion from government, not to protect government from religion. And in the case of Coon's example of religious doctrine in schools (to the point of disallowing prayer, or clothing that promotes the Christian faith) one must ask, how is the presence of God in the school system a case of Congress making law to establish a state religion?

In the bygone era of America's past God played an important part in our culture, schools, and political structure. Somehow, along the way, Christian children became pawns in a war against God. In this war our children have become forbidden to use the word God in the public schools, public school students are forbidden to say prayers at football games or on the steps of the Supreme Court, and it has gotten to the point that religious speech has become banned from the public square? There is even a case where a military chaplain got in trouble for ending a prayer in Jesus' name. . . but isn't a chaplain a pastor?

What is worse, this slow deterioration of our moral structure is being primarily spearheaded by the courts. But, the judicial branch does not have that authority. Judicial Review of the Constitution is not a Constitutionally granted power. The courts seized that power in the Marbury v. Madison case in 1803, and it has gotten worse with each passing generation.

One must ask themselves, if the Constitution is designed to limit the powers of the federal government, why would it be consistent with the Constitution to allow the courts the ability to determine what laws are constitutional, and what laws are not? Such power gives the federal government the ability to decide for itself what its own authorities are, opening up the potential for an out of control tyrannical system that does whatever it pleases regardless of the will of the people, and more importantly, regardless of the rule of law as prescribed by the U.S. Constitution.

In addition, the legislative powers given to Congress are enumerated, meaning that Congress may make laws only on those specific subjects listed in the Constitution as proper objects of legislation. Religion and speech are not among the listed powers, therefore Congress may not make any laws about religion or speech, especially including laws that "prohibit the free exercise of religion thereof" as indicated in the First Amendment.

Remember, the Founding Fathers found it necessary to indicate that "Congress shall make no law respecting an establishment of religion" because of the prevailing situation in Europe where the centralized governments had used State Religions as a mechanism to control the people. In England, at the time the colonists fled to America, established religion was used to coerce the people into obeying the civil government, forcing people to practice the established denomination under pain of death, imprisonment, and fines. This also allowed the government to force the citizens to financially support the established church.

Though the States (except for Rhode Island and Pennsylvania) were theocracies at the time of the writing of the Constitution, religious freedom spread through the states during the early years of the nation. However, the federal government was specifically forbidden from doing the same. It was up to the States to clean up their own houses individually, without influence from the federal government.

As the nation moved into the new century "established religion" (an "established" denomination supported by mandatory taxes or tithes) was a thing of the past. The churches now maintained their establishments through the voluntary offerings of their adherents.

Nowhere in any of that is the liberal definition of the separation of church and state. O'Donnell had it right, and the American People know it.

But what is even more interesting is that as the left tries to paint O'Donnell as a kook, we must realize that Chris Coons believes in a Chinese/Australian Conspiracy Theory, saying that, "The Australian navy engaged in joint exercises with the Chinese and specifically excluded us recently. A dramatic shift in the Australian policy."

Wow, now that is seriously nuts.

And the media is trying to tell us that O'Donnell is the crazy one.

The Lie of Separation of Church and State - Canada Free Press