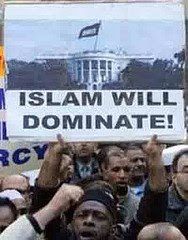 A friend of mine recently alerted me that in Murrieta, California the textbooks romanticize Islam in ways that are so far from the truth, the only conclusion one can come to is that the manner in which these textbooks were written was specifically with the intention of indoctrination in mind. Another friend confirmed with me that the same is going on in San Diego. Then an Internet acquaintance sent me a link to an article from the New York Daily News "Sowing The Seeds of Hatred" that reminded us that this is nothing new, and that the Islamic jihad is alive and well in Muslim schools right here in America.

In a report "Shariah: The Threat to America; An exercise in Competitive Analysis, Report of Team 'B' II" by the Center for Security Policy (a report my campaign manager from when I ran for city council sent me last November, and I just hadn't gotten around to reading it until this weekend) I found this:

The Department of Education and school boards across America have been penetrated for the purpose of encouraging, subliminally at first, submission to shariah in textbooks and pedagogy. The object is to control and soften the history of Islam and how it is taught to American students. Middle East Studies programs at several leading U.S. universities have received $20 million apiece from a prominent Saudi prince and enabler of the Brotherhood, Prince Alwaleed bin Talal, with predictable results regarding their curriculum.

What is basically going on is textbooks used around America are teaching children lies about Islam in an attempt to soften America students so as to more easily accept the growing silent assault on America by Islam, as Islamic school's textbooks contain passages that are blatantly anti-Semitic, condemns Jews as a people, and repeats old replacement theology, pagan and gnostic canards about the Jews wanting to kill Christ and faking their Holy Scriptures to mock God.

Islamism is teaching their people through Islamic texts that "the Jews" killed their own prophets and betrayed the Prophet Muhammad through their inherent deceitfulness. In the New York Daily News article, these Islamic textbooks were found in private Muslim schools, and the textbooks are filled with inaccuracies, hate-filled condemnations of Jews and Christians, and of course continuous declarations of Islam's supremacy over the entire non-Muslim world. This teaching of racial and religious superiority, by the way, is the same doctrine used by totalitarian dictators of the past over and over, and includes specifically Adolf Hitler (does Hitler's Youth come to mind?).

The textbooks in Muslim schools, even here in America, which are widely cited by Islamic educators, are geared towards building a rationale for hatred that, in the end, can lead to a new holocaust, and the eventual domination of Islam over the world. And they are trying to do it in a manner similar to liberal methods - propagandized indoctrination of the youth.

The results of their efforts? Things like Iraq War Veterans being heckled on college campuses, American Universities being willing to invite controversial Muslim political and religious leaders to speak on their campuses to further their Islamist propaganda, emboldening our enemy both overseas and domestically, and guiding the sheeple to be more accepting of anti-Israel and pro-Islamic policies put forth by the Left both by the politicians and the judiciary.

"Shariah: The Threat to America; An exercise in Competitive Analysis, Report of Team 'B' II" by the Center for Security Policy

Why Is the New York Times Shilling for Far-Left Terrorists While Smearing the Patriot Who Exposed Them? - Big Government

Jihad in Lubbock, Texas my Hometown or as we say in Texas GEE-HAAD! - Tea Party Nation