There is currently a class-action lawsuit going on against Wal-mart for discriminating against women. Wal-mart has allegedly promoted men over women, and it is alleged that the salaries for women are less than their male counterparts at Wal-mart. The lawsuit has worked its way all the way up to the U.S. Supreme Court, and the ruling could be a defining moment in the history of women's rights - if the courts allow them to use the "class action lawsuit" avenue in their fight in the first place.

While it is true that gender discrimination still exists, the societal norms have changed so much that it brings to mind the old Virginia Slims cigarette ad from the sixties and seventies that proclaimed, "You've come a long way, baby." My wife is a prime example. She is both a woman, and a minority. She was born in a different country which also makes her an immigrant. Her parents immigrated here when she was quite young from Mexico, so though she did not naturalize until 2007, she was raised in the American environment. As a woman she made the choice to work when she was younger, and then later become a stay-at-home wife and mother. After our youngest child finally moved out to strike out on her own, my wife returned to work, hoping to make a career in what she does. While she was at home all those years, she chose to seek education, and has a Bachelor's Degree in Psychology, and four Associate Degrees. But she did not stay home to do the laundry, clean the dishes, and change diapers because I demanded she do so, but by choice because she felt during that time period our children would be better for it. A hundred years ago, those choices would not have been available to her. Her opportunities would have been limited, and education would have been out of reach. The importance of the women's rights movement in her case is not whether or not she was being treated the same as men, but simply that the movement gave her the choice to compete in the workforce, or not to. That is the importance of the women's rights movement. . . that it created choice - and choice equals liberty.

The term "sexism" is used to describe the generalized belief that one gender is superior to another. Historically, such a belief generally presumed male superiority in all aspects of life. In modern history, the tide has turned, and gender-role norms and behavior have broken down, and women have gained opportunities not afforded to them before.

Reality dictates that there are gender differences, and that men and women differ in a number of ways, so generally men and women are best suited for certain roles. However, there are always exceptions, and through the efforts of the women's liberation movement, the choices for women usually exist in today's society.
Due to the nurturing nature of women, for example, the role as a mother is best suited with a female. But such a reality should not then dictate that women only belong at home with the kids, or do not belong in the workforce, just because women are more naturally equipped to raise children. And on the flip side of that coin, such a reality that women tend to be better suited to be the stay-at-home parent does not mean that all men are somehow incapable of performing the same tasks in regards to the upbringing of children.
In other words, reality dictates that there are differences in the sexes, and that men or women generally tend to be better suited for particular roles or tasks, but such a reality should not then result in an oppression of one group over another when a member of one of those groups decides to break with tradition.

Public awareness that women have been discriminated against because of the idea of male superiority has increased in our modern society, and in an attempt to correct what is believed by many to be prejudice against women because of their sexual identity, movements have formed, and laws have been created. But, like with anything, some parts of this effort to ensure women are treated equally from a societal viewpoint have taken the movement to an extreme.

This is not the first and only time a drive towards providing women equality has emerged, but this is the first time it has progressed to the point it has. Historically, the New Testament of the Bible reveals that it was women that first witnessed Christ had risen, and they were believed when they went to tell others of the good news - and this happened during a time when a woman's testimony held no weight. During the early years of the American experiment, Aaron Burr, Vice President under Thomas Jefferson during the first presidency of the 1800s, spoke out for women's rights, as well. Burr, inspired by his intelligent wife, ensured his daughters were educated and prepared to compete against the men in the world. Burr was also one of the few politicians of the day that spoke out for the rights of women, even suggesting that women should be able to vote - a right women would not enjoy until the ratification of the Nineteenth Amendment in 1920. Unfortunately, throughout history, due to the dominant belief that women were valuable "commodities," though there were small battles won in female land ownership, inheritance, and even voting rights, for the most part the general rule of the day was that women were subordinate to men.

The Native American culture viewed women differently, where the societies were matrilineal (When descent and inheritance pass through the female side of the family) and matrilocal (The custom of married partners settling in or near the household of the wife's family). In that culture women had considerable power because property (housing, land, tools) belonged to them and was passed down from mother to daughter. Husbands joined the wife's family, giving the male little chance to become an authoritative, domineering figure. In cases of divorce, in some of the Indian societies, the wife could simply throw out his belongings from the residence. In these societies often the women were also very influential in tribal governance.

In addition to Aaron Burr's push to give women more recognition as members of society, Abigail Adams in a letter to her husband John Adams (second president of the United States) also made a plea for equal rights for women, calling the male dominated culture she lived in "tyrannical," and that she hoped with the rise of the new United States, that the men of that country would be ". . . more generous and favorable to [the ladies] than [their] ancestors." However, as the United States grew and prospered, the attitudes that arose were that women were there to please, and men were there to achieve.

Well into the Industrial Revolution women continued to be denied the right to vote, own property in their own name, testify in court, make a legal contract, spend their own wages without their husband's permission, or even retain guardianship over their own children if their husband died or deserted them. Of course not everyone thought these were good standards, during that time period, but they were the prevailing norms. However, there were significant steps forward during the 1800s. In 1848 the New York State legislature acted to protect the property rights of married women, and in 1869 the Wyoming Territory gave women the right to vote, continuing that practice after it became a state in 1890 - the first state to do so.

The abolition movement prior to the American Civil War attracted female activists willing to fight against the continuance or expansion of slavery. But it wasn't until the Suffrage Movement that we saw how fierce the fight for women's rights could become.

Societal norms, especially when they have been in place for centuries, can be difficult to change. The suffragists, though they were met with fierce resistance, marched forward. Their rallies, protest marches, and demonstrations were often met with ridicule, and even physical abuse. Often, the result of the battle for women's rights resulted in arrest, and jail. In 1913, in Washington D.C., federal troops were brought in to deal with the unrest caused by the protesters. In 1916, six months of picketing the White House resulted in mass arrests, and imprisonment when the women refused to pay what they believed to be "unjust" fines.

In 1919, Congress proposed the Nineteenth Amendment, and the States ratified it a year later. The amendment gave women the right to vote. With this new power, women were able to attempt to elect those who shared their beliefs, hoping that other measures that would push forward the fight for women's rights would also emerge.

After the Nineteenth Amendment passed, the percentage of women in the workforce increased to about 25 percent. Though discrimination continued, and women rarely held decision-making positions, it was definitely a step in the right direction.

During World War II, women were needed in all areas since many of the men went overseas to fight. The percentage of women in the workforce increased to 36 percent. The boom for women was short-lived, however. When the war ended, and the soldiers returned home, 2 million women were fired within 15 months after the end of the war to make room for the men.

Despite such setbacks, by the 1980s, the percentage of women in the workforce exceeded 50 percent.

- The Women's Liberation Movement
The 1960s was the decade where social activism was at its greatest. President Kennedy appointed a Presidential Commission on the Status of Women, which documented extensive sexual discrimination in the country. After Congress failed to implement the commission's recommendations, women's rights advocates formed the National Organization for Women (NOW) in 1966 in the hopes of organizing the efforts of women, and ending many forms of sexual discrimination. 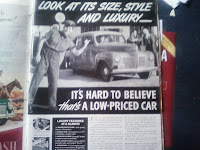 One wonders if the organization still adheres to its original platform, or has become something never originally intended. Regardless, the proof is in the pudding. When you compare ads from a LIFE Magazine dated November 6, 1939 where a woman is being the "good little woman" sitting in the car while the men stand nearby talking, to those "You've Come A Long Way, Baby" Virginia Slim ads of the 60s and 70s, to Geraldine Ferraro in 1984 being a vice presidential candidate, and Sarah Palin doing the same in 2008 while Hillary Clinton was a viable presidential candidate, it is easy to recognize that though there are still some rough spots that need to be smoothed out, in the end, the cigarette ad is absolutely correct. . . "You've Come A Long Way, Baby."