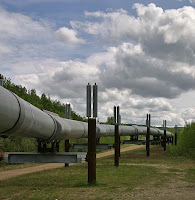 The last time gas prices reached four dollars a gallon, George W. Bush threatened to drill domestically, and immediately prices dropped. And this is not the first time this has happened. During the early 1980s Ronald Reagan announced that we were going to start drilling to drive down prices, and the mere threat of drilling made the Jimmy Carter oil crisis history overnight.

The Democrats say that "Drill Baby Drill" won't do anything to bring down prices. Yet, Obama was willing at one point to release some of our emergency reserve. Why? Because an added supply brings down oil prices, and he knows it.

But, simply because the GOP supports domestic drilling, the Democrats oppose it - despite the reality of Supply and Demand.

Enter into the picture Shell Oil Company. Shell Oil Company planned on drilling in the Arctic Ocean off the northern coast of Alaska. However, they now have announced that they will be scrapping those efforts because the EPA’s Environmental Appeals Board decided to withhold critical air permits.

It is as if these progressive liberal left loons want America to fail, and want the gas prices to keep going up.

And this is not even mentioning Obama's decision to pay Brazil to drill, while enforcing a moratorium in the Gulf against American companies.

Besides, since when does the EPA have the constitutional authority to dictate to a private business in such a way?

Shell abandoning these plans to drill follows five years and nearly $4 billion dollars on plans to explore for oil in the region. The leases alone cost $2.2 billion.

The EPA’s appeals board ruled that Shell had not taken into consideration emissions from an ice-breaking vessel when calculating overall greenhouse gas emissions from the project (because of the man-made global warming myth). Our economy, and gas pumps, will suffer as a result.

What are we missing out on? An estimated 27 billion barrels of oil. That would be about two and a half times more oil than has flowed down the Trans Alaska pipeline throughout its 30-year history (which is currently at only a third of capacity).

The EPA believes it is above the law, above the constitution, above any checks by other agencies, and the final word on anything they decide to undertake.

Didn't we fight a revolution against a king for the British acting the same way?