Constitution Radio with Douglas V. Gibbs on KCAA, KCXL, and soon to add a station in Ohio 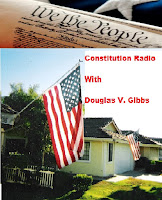 The Occupy Wall Street folks, like the protesters against Governor Walker in Wisconsin, claimed "This is what Democracy Looks Like!" What would the Founding Fathers think of that?

And of course, last but not least, this week's Nuts and Nuggets.

Join us at 2:00 pm Pacific on KCAAradio.com, or catch the rebroadcast on Tuesday on KCXL. A station in Ohio will be joining our growing show in the next couple weeks. I will provide details as they come available.

Past podcasts of all shows are also available.
Posted by Douglas V. Gibbs at 12:45 PM