Give Me Liberty, or Give Me Welfare? 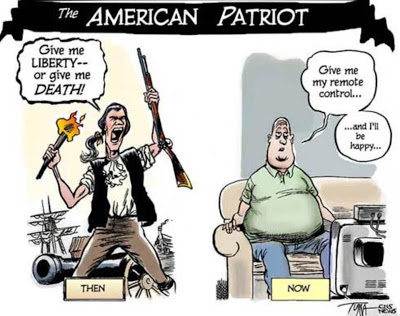 The final sentence of the Declaration of Independence reads: "And for the support of this Declaration, with a firm reliance on the protection of divine Providence, we mutually pledge to each other our Lives, our Fortunes, and our sacred Honor."

Today, it might read: "And for the support of my fat ass, with a firm reliance on the goodies offered by the federal government, I accept food stamps, a liberal education, and an indoctrination by political correctness and the liberal media.  Go Hollywood!"

Then again, let's not get too down, just yet.

The American Revolution was fought by 3% of the population, and the drive for independence was only supported by a third of the population in the colonies.  Those that engaged in it did it because it was the right thing to do, and their sacred honor would not allow them to do otherwise.

The difference today is we have more support in our corner.  This is a center-right country.  A vast majority of Americans are people who believe that this nation is exceptional, and that Americanism is alive and well if we'd just embrace it.  Unfortunately, these people haven't been voting, because the Republican Party has left us.

Obama is not supported by the majority of the country.  He is not the beneficiary of a nation leaning left.  The nation's entitlement dependency has not topped over 50%, and to be truthful, many of those people using government programs would just assume not be in that kind of position.

It isn't time to hang up our hat. It is time to rally the troops.  Be it around the GOP, or a new conservative party, Americans willing to pledge to each other their lives, fortunes, and sacred honor can still turn this around.  We just have to be willing to join together, and work our way back to the Constitution.

The liberal left is all about collectivism, so of course they are better at the game than we are.  Conservatives are individuals, so we are all just a little different.  But while we are arguing over our differences, the collectivists of the Democrat Party are assimilating into a single force, joining together like a bunch of mindless Borg, and are getting their base out for the vote.

Okay, fine, it has become a fight, and the leftists are going for broke. They have spent more than any administration in history.  They are trying to hammer the producers in society with a Marxist progressive tax rate.  They have moved towards nationalizing the automobile industry, banking, credit, and health care.  And now they have set their sights on our guns.

The American Revolution became a reality when the British went after our guns in Concord, but the Minutemen stopped them at Lexington Green.

The move against our guns is the final straw.  The silent majority, as it did in 2010, is ready to roar.  The sleeping tiger is ready to strike.  It is time to stand up for Americanism.  If they disarm us, we will no longer be citizens. . . we will become subjects.