Do You Not Recognize the Treaty of Tripoli? 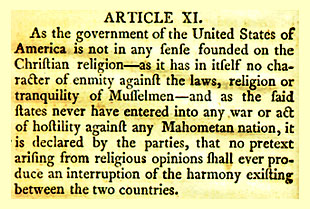 As an originalist, one that defends the original intent by the Founding Fathers of the United States Constitution, I contend that the United States of America enjoys, or at least has enjoyed, a prosperous history largely because of the influence of Judeo-Christian values in the foundation of our nation.  The structure of a bicameral congress, due process, a representative system, and so forth, was largely influenced by the Mosaic System, which is presented in the Old Testament Book of Deuteronomy.  The Founding Fathers were men of faith, and though they had their harsh opinions of the organized church (The Church of England and the Catholic Church of that era were their frames of reference, after all) they were men of faith.  In that way, there was a strong Christian influence in the founding of the United States.  Samuel Adams called America a gift of Heaven.  George Washington said that "Religion and morality" are indispensable supports of "political prosperity."

The Founding Fathers were all Christians, not deists as we have been told.

In an article I wrote back in 2011, Myth #15: The Founding Fathers Were Deists/Atheists/Not Christians, one which served as a strong influence of one of the chapters of my book "25 Myths of the United States Constitution," I began with a quote from Benjamin Franklin (a person we are told was a deist). He said, during the Constitutional Convention, "I have lived, Sir, a long time, and the longer I live, the more convincing proofs I see of this truth- that God Governs in the affairs of men. And if a sparrow cannot fall to the ground without his notice, is it probable that an empire can rise without his aid?" -- Ben Franklin, July 28, 1787

Even the most celebrated deist, Benjamin Franklin, recognized that God sometimes involves Himself in the affairs of men. The American Revolution was a miracle, and the U.S. Constitution, as far as these men were concerned, was created with the assistance of Divine Providence.

Of the 56 signers of the Declaration of Independence, all of them were Christians:

Out of the 56 signers, only two were overtly unorthodox ”Unitarian/Universalist”: John Adams and Robert Paine (both came from a Congregationalist background). In the most traditional Christian orthodoxy, this "we all get into Heaven somehow" attitude tends not to be considered very Christian at all. Thomas Jefferson and Benjamin Franklin are celebrated as being mere Deists according to the most liberal thinking, though Jefferson invoked the name of Christ quite a bit for an alleged non-believer, and Franklin seemed to Christianize more and more as he got older. So, taking those four out of the mix, just for argument's sake, and keeping the remainder as examples of the “bible-believing” Christians in the most fundamental classical sense, we still find it to be an interesting set of numbers.

The Founding Fathers were indeed men of faith.  They were biblical Christians who believed deeply in the Faith the Bible offered, and that faith was a very important ingredient in the recipe behind the creation of our country.  Though the founders loved God, and believed in Christ, they understandably hated man-made religious organizations and the damage such systems could place on society, and government. They desired the leaders of the new nation to be Godly men, without the influence of an overbearing institutionalized religion. They did not want the church controlling the government, nor the government controlling the church, yet they wanted God's presence to emanate throughout the new government. The founders desired that the members of this new government would be men of God that held to Christian values and principles.

Signer John Witherspoon said: "It is the man of piety and inward principle, that we may expect to find the uncorrupted patriot, the useful citizen, and the invincible soldier. – God grant that in America true religion and civil liberty may be inseparable and that the unjust attempts to destroy the one, may in the issue tend to the support and establishment of both."

So, did this nation enjoy a Christian founding?

Yes, but not in the theocratic manner some may think. Yes, most of the States were theocracies at that time, but the founders were searching for a balance where God was an instrumental part of the nation, while keeping the evils of institutionalized religion and an established church at bay.

Approximately 98 percent of the colonists were Protestants, with the remaining 1.9 percent being Roman Catholics. America's colonial origins, or at least in the northern colonies, were encouraged by the desire for religious freedom

Early colonial laws and constitutions such as the Mayflower Compact, the Fundamental Orders of Connecticut, and Massachusetts Body of Liberties are filled with biblical language that, in some cases, actually incorporate biblical texts wholesale.

Early colonial constitutions and laws reveal a Christian heritage that was quite extensive. In fact, at least nine of the 13 colonies had established churches, and all required officeholders to be Christians, or, in some cases, Protestants. Quaker Pennsylvania, for instance, expected officeholders to be “such as possess faith in Jesus Christ.” Only Rhode Island seemed to practice true religious freedom at that point in the sense that became popular later after the Virginia Act for Establishing Religious Freedom in 1786 by Madison and Jefferson.

The Declaration of Independence itself lends to the Christian nature of this nation during that time period: “We hold these truths to be self-evident: that all men are created equal; that they are endowed by their Creator with certain unalienable rights; that among these are life, liberty and the pursuit of happiness.”

The principles of this nation as founded were heavily influenced by Christian ideas and values. The Founding Fathers recognized that we are flawed (Romans 3:23 King James Version: For all have sinned, and come short of the glory of God), they understood that God ordained moral standards, Christianity informed the Founders’ understanding of substantive concepts such as “liberty," they believed we are created in the image of God (we are a spirit as God is a spirit), biblical teachings regarding the laws of Moses and the construction of government under Mosaic Law heavily influenced the creation of the structure of our government, and Faith led many Founders to conclude that religious liberty should be extensively protected. Many also thought that civic authorities should encourage Christianity and that it is appropriate to use religious language in the public square.

The founders believed that religious liberty is a right, and that it must be protected. This conviction was largely based upon the biblical principle that humans have a duty to worship God as their consciences dictate. Thanksgiving was created, and officially proclaimed by George Washington in 1789, for the purpose of giving thanks to God for the Blessings this nation had received.

It is clear that the founders were not largely Deists, Atheists, or non-Christians. This nation was founded as a Christian nation, but one that welcomes religious diversity, and yes, even secular thought.

Recently, a reader came across the above mentioned article I wrote in 2011, and asked, "Why do you not recognize the Treaty of  Tripoli?"

A portion of the Treaty of Tripoli was written by John Adams, the same person who is quoted as saying, "Our Constitution was made only for a moral and religious people.  It is wholly inadequate to the government of any other."  If the language in the Treaty of Tripoli is taken at face value, then we have a contradiction.  Therefore, we have to dig deeper to figure out why it was written in the manner it was written, in order to take it into proper context.  The language in the treaty reads: "As the Government of the United States of America is not, in any sense, founded on the Christian religion, as it has in itself no character of enmity against the laws, religion of tranquility, of Mussulmen, and as the United States never entered into any Mahometan nation, it is declared by the parties that no pretext arising from religious opinions shall ever produce an interruption of the harmony existing between two countries."

John Adams, though an integral founding father, was one that leaned towards bigger government, and appeasement towards foreign nations in order to avoid foreign entanglements.  In other words, he had tendencies that would lean more towards the Democrats of today, than that of Republicans.  Though not as drastic as Alexander Hamilton, the political attitude of Adams fueled an animosity between him and Jefferson that lasted most of their lives.

During Adams' presidency, Muslim pirates were raiding American ships.  American sailors were held for ransom, or were taken as slaves.  Treatment of Christian captives were especially harsh.  Thomas Jefferson urged Adams to take military action. Adams considered Jefferson to be a warmonger, though he used other words to describe Jefferson's hawkish attitude when it came to dealing with the Barbary Pirates.  Instead of seeking a military solution, Adams decided to take an appeasement route, and in addition to paying the tribute monies the Barbary Pirates were demanding, he offered agreements through carefully structured written presentations in the hopes that if he showed the Islamic pirates that the Americans meant no harm to them, they would leave the American ships alone.  The Treaty of Tripoli was a part of that effort.

I am almost shocked that after the treaty was ratified, someone didn't cry out the words Neville Chamberlain spoke after a treaty of appeasement with Nazi Germany a century and a half later, "Peace in our time!"  I am sure, though, somebody proclaimed something very similar.

The official treaty was in Arabic text, and a translated version by Consul-General Barlow was ratified by the United States on June 10, 1797.

The language that the United States is not "founded on the Christian religion" was challenged by a number of the political minds of the era. Secretary of War James McHenry protested the language of the treaty before its ratification, writing later in his life in 1800 of the treaty, "The Senate, my good friend, and I said so at the time, ought never to have ratified the treaty alluded to, with the declaration that 'the government of the United States, is not, in any sense, founded on the Christian religion.' What else is it founded on? This act always appeared to me like trampling upon the cross. I do not recollect that Barlow was even reprimanded for this outrage upon the government and religion."

Jefferson obtained a Koran so that he may understand the enemy, and realized that Islam went beyond religion, and trying to proclaim to the enemy we are not a Christian nation would not be enough to stop the atrocities being committed by Muslim pirates.  Tripoli broke the treaty in 1801, and President Thomas Jefferson waged war against the Barbary Pirates.  Under Madison, after the War of 1812 was over, President James Madison finished off the Barbary Wars in 1815.

Once one understands the context of the whole situation, it is reasonable to realize that the language in the Treaty of Tripoli was not a declaration of secularism as those that support the modern version of the unconstitutional idea of "separation of church and state" may claim, but an appeal to a Christianity-hating political system such as exists in Islam, in the hopes that such a declaration would make the pirates of Tripoli stop their attacks against American vessels.

The Treaty of Tripoli neither stopped the attacks, or the demand for tribute.  As Jefferson and Madison understood early on, only military might would stop the atrocities being committed by the Muslim jihad.