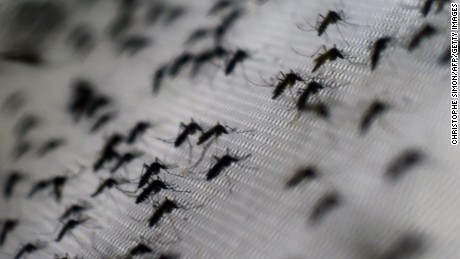 And it has claimed its first fatality there - and the victim was neither female nor pregnant:

Health officials on Friday confirmed the first U.S. death of a patient infected with the Zika virus in Puerto Rico.

The man, who was in his seventies, died from severe thrombocytopenia, a bleeding disorder caused by abnormally low blood platelets, which are needed for blood clotting.

Shortly after those symptoms subsided, the man developed "bleeding manifestations" which sent him to the doctor for treatment.

Sharp said the man was diagnosed with a rare Zika complication known as immune thrombocytopenic purpura or ITP, an autoimmune disorder in which the immune system attacks blood cells, called platelets.

Sharp said the ITP case followed the same pattern as patients with Guillain-Barre Syndrome, a paralyzing neurological disorder linked to Zika infections in which the immune system attacks nerves. In both cases, the autoimmune attack occurs after symptoms of Zika have cleared.


A heretofore unobserved complication of Zika or a mutation?  If the latter, it appears to be mutating awfully quickly, and in ways that might stop being so rare.  Currently virologists and medical personnel don't know anything about that process or those complications and have no way to stop it.  Eventually they will, but the virus is spreading with far greater rapidity.

Puerto Rico has 683 confirmed Zika cases, 65 of which are pregnant women, and five confirmed Guillain-Barre Syndrome complications.  There are over a quarter of a million confirmed and suspected cases in the Caribbean, Mexico, Central and South America.

And it's headed on our direction.

Just one more way in which my beginning-of-year prediction that 2016 would be the most cataclysmic year in American history is coming inexorably true.