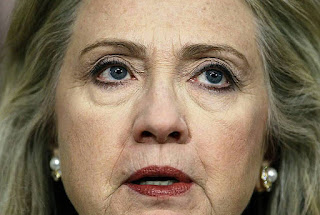 Special to the Pistachio

It was late at night and an all female crowd packed the Castro Theater in San Francisco. “I'm the only one” by Melissa Etheridge was playing over the sound system, there was a mysterious veiled object next to the podium, and a powerful spotlight was trained on Hillary's solar powered microphone. A giant Jane Addams portrait was a prominent backdrop.

Toward the end of the song, Clinton appeared wearing an Ellen DeGeneres pantsuit and sporting a butch haircut matched with oversize hoop earrings. The crowd went wild with applause and cheers.

When the noise died down, the song “Drive” by Melissa Ferrick came on. Two scantily clad, attractive women approached the veiled object next to the podium and removed the curtain, which revealed Clinton's tattered “This is going to the White House” talking pudendum prop, which had some duct tape holding it together from it's rough treatment at the Natchawatchee Band of Casino Indians Freeway Casino.

Hillary stood on stage smiling and waving for a while, the song “I kissed a girl” by Katy Perry came on and Clinton walked through the main isle, exchanging hand shakes, air kisses, and the occasional, full on French kiss accompanied by a mutual grope.

Clinton eventually exited the front door, whereupon she noticed a large crowd of men filling Castro Street and spilling down the block. As this was in the Castro District of San Francisco, about half were naked and some were wearing Village People costumes.

To her left was Bernie Sanders, wearing only a leather harness and a Greek fisherman's cap. To her right was Donald Trump with huuuge hands attached to fingers like giant knackwurst and a post it note preserving his modesty. Moammar Kadhaffi was in the crowd, as were Ambassador Stevens, Smith, Woods and Doherty. A reset button with the word “nyet” on it was thrown at her from somewhere in the pack. A mysterious gust of wind blew a pile of redacted sheets labeled “Top Secret” around her feet. Resembling Tinker Bell with Dragonfly wings, finger sized Monica Lewinski, Jennifer Flowers and Paula Jones were flitting in her face. FBI Director James Comey was to her side watching and taking notes on a little scratch pad. Newt Gingrich's face was on the freshly risen full moon. Abu Bakr al-Bagdadi stood half out of a recessed doorway a couple
of blocks away, pointing her out to a little boy wearing a suicide vest.

The mob began chanting “What's your problem with men?” and began advancing on Clinton in a zombie manner. Clinton turned and tried to open the theater door, but it was locked. She pounded on the door while a hundred hands grasped her, pulled her back from the door…

… And she woke up with her heart pounding, slowing realizing she was safe in her own shaking bed. Hillary looked over at Bill, who was lying on his side with his back to her, elbow twitching in time with the bed shaking. She yelled “Knock it off, Bill!” and punched him in the kidney as hard as she could.

-- Political Pistachio Conservative News and Commentary
Posted by Douglas V. Gibbs at 6:49 AM