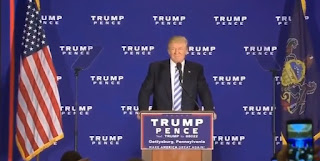 I suppose we should ask, where was the Trump of Gettysburg during the three debates?  In his Gettysburg speech, in an iconic location, Trump unveiled what a Trump presidency would truly entail.  He laid out his political pledges, and labeled it a "Contract with the American Voter," giving us a plan modeled after the 1994 Republican 'Contract with America'.  It's time to drain the swamp in Washington, he explained, adding in a Lincoln-esque twist he plans to replace D.C. elites "with a new government of, by and for the people."
A Trump aide said the reason the Gettysburg Civil War battlefield site was chosen for this speech because it mirrored Trump's efforts because "Gettysburg was the moment when the war turned."

"It is a contract between myself and the American voter, and begins with restoring honesty, accountability and change to Washington," Trump said.

Included are six anti-corruption pledges, seven actions related to jobs and trade and five on immigration and the 'rule of law.' He ended his contract with a list of 10 bills he said he would try to quickly shepherd through Congress.
"Hillary Clinton is running against all of the American people, and all of the American voters," he said.

Trump also said that the was concerned about the possibility of rampant voter fraud that could keep him out of the White House, and other Republicans from winning their seats in Congress.

Citing Pew Research Center numbers, he said that "1.8 million dead people are registered to vote, and some of them are voting. I wonder how that happens!"

He also made mention of the 2.8 million people who are "registered in more than one state," and added that "14 per cent of non-citizens are registered to vote."

The most well received promises were Trump's pledge to repeal and replace the Obamacare medical insurance law and to end federal funding for sanctuary cities.

He listed his executive actions he has planned.
As for the wall between the United States and Mexico, the budget will get a line-item with a proposed piece of legislation that will fund its construction, "with the full understanding that the country of Mexico will be reimbursing the United States."

Tax cut promises were reiterated.  A 35 per cent tax cut for middle-class families with two children, and a reduced 10 per cent rate for American companies that bring overseas money back home.

Trump also reminded the audience of his grievances against the journalism profession and the parade of women who have accused him of unwanted kissing and groping.  The accusations date back years, and even decades, ago.

He said after the election, he plans to sue them.

"Every woman lied when they came forward to hurt my campaign. Total fabrication. The events never happened. Never," said Trump.

"All of these liars will be sued after the election is over."

He also said he would litigate against the Democratic Party for allegedly paying saboteurs to start fistfights at his campaign rallies.

When it came to jobs and trade, he laid out seven items.
The pieces of legislation Trump said he would be pushing for:
Trump will need a Republican Congress to make these things happen, so the race for the White House isn't the only important election on November 8.

The MSM will not discuss, examine nor contrast these proposals with those of the statists such as Obama and the Hildabeast.

Americans will not examine them but rather opine on how they feel about them rather than weighing their merits.

I hope Trump wins, but the intelligence of the average American is dismal. To know this you have to do jury duty.