The Wisdom, Or Lack Thereof, of President Trump's Muslim Ban 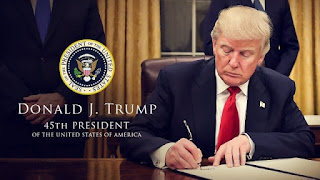 When it comes to running the country as president of the United States, what we have learned about President Donald J Trump is that he is impatient and wants to get things done as quickly as possible. What that means is he is trying to implement what he wants to do by executive order.  Executive orders are supposed to be either proclamations, or rules for within the executive branch. The executive branch is the enforcement arm of the federal government.  The authority to execute the laws of the United States are the job of the President of the United States, which he can instruct his departments and agencies to carry out. The thing is, when an executive order is put into place, we must also determine whether or not it directly enforces an existing law, or is it trying to create law.

The protests over the weekend regarding Trump's executive order to temporarily ban persons from 7 Muslim countries rings the question of authority and constitutionality to light. When we look at what Donald Trump did with his executive order banning the entry of persons into the United States of certain persons we must ask ourselves if he is acting to execute an existing law, or has he created or modified law outside constitutional authorities granted to the executive branch.

Article 1 Section 9 of the United States Constitution grants Congress the authority to prohibit persons from migrating into the United States.  Congressional action on this must be with legislation, of which the President would sign once the two Houses approve it. There are already a myriad of laws on the books regarding immigration, and during the President Obama administration's time in the White House he chose not to execute those laws.

While I am not going to pretend to know every law on the law books, it has come to my attention by way of a discussion with a retired Border Patrol agent, that in the US Code Section 8, the president has the discretion to prohibit certain persons from immigrating into the United States if he believes they are to be a danger to National Security. This makes sense, since he is the commander-in-chief. when it comes to running the country as President of the United States.

There is also an argument out there that there is a law on the books that prohibits persons from being prohibited because of their nationality.  It it is a law, then Congress can repeal it.  In the Constitution there is no verbiage limiting Congress regarding their decision on who to prohibit.  There is no language in the Constitution associated with immigration that says Congress cannot prohibit persons because of their nationality, ethnicity, nor religion.

What we have learned about president Donald J from the current situation regarding his "Muslim ban" executive order (as the left is calling it) is that he is impatient and want to get things done as quick as possible. What that means is he is trying to implement what he wants to do by executive order. Again, executive orders are supposed to be either proclamations, or rules for within the executive branch. The executive branch is the enforcement arm of the federal government in which the ability to execute the laws of the United States are his job. The thing is, when an executive order is put into place, we must also expect the President to take more into account than merely whether or not the order directly executes existing law, or is it trying to create law.

The protest over the weekend regarding Trump's executive order to temporarily ban persons from 7 Muslim countries brings another question to light.  When we look at what Donald Trump did with his executive order we must not only ask if he is acting to execute an existing law, or has he created law or modified law outside constitutional authority, but also did Trump perhaps jump the gun a little bit by not take into consideration the intricacies of making law.

Among the legal discussions regarding Trump's executive order, there is a question regarding his executive order in terms of if it includes persons with green cards or approved visas. In other words, does the executive order ban all persons who are not citizens, or persons who are not citizens or those who have failed to secure certain work visas or certain green cards (resident alien cards). The confusion has created an interesting situation. Do we have exceptions to the executive order such as the mother who is returning from Iran who lives here on a green card? This has created a legal quandary at the airport, and the liberal-left lawyers are jumping all over it. The ACLU is having a field day with it. So the question is did Trump take into consideration all of these possibilities.

Had Trump gone through Congress wouldn't they have considered all of these possibilities because of the debates they would have to have with the other side of the political spectrum?  Even if Trump has the authority as President of the United States to put into action the executive order that he signed, would it have been a good idea to consult Congress, and request legislation first so that all of the legal intricacies and necessary provisions to quell all fears would be included? This is where I think President Trump may have overstepped his bounds. Whether or not it was constitutional or legal for his executive order is one thing.  Whether or not it was a wise move to word it exactly the way he did without Congressional influence is another. You are only as good as the people around you, and if the people around you are able to make sure all of the "t"s are crossed and "i"s are dotted, then it is wiser to go through those people before you do something.

Henry Ford, when asked about his success, indicated he surrounded himself with people who knew what they were doing and he did what they told him. Donald Trump needs to learn to do the same. "What" Trump was trying to do with the executive order is not the problem.  "How" he decided to do it is. Whether or not it was legal or constitutional is definitely an important piece of the puzzle, sometimes a President should not do what he "can" do, but instead should consult those around him who have been in Washington longer, understand the legal system, understand how to debate and how to cover themselves.  Trump did not do that because of his impatience.

I will admit, it is still better than what Obama did.  He thought he was too smart for Congress, and purposes circumvented Congress, not because of impatience as we see in the case of Trump, but because of his narcissism that told him he didn't need Congress.

-- Political Pistachio Conservative News and Commentary
Posted by Douglas V. Gibbs at 10:39 AM


Did he really need to go to Congress for this? To wit:

Does this not give him the authority?