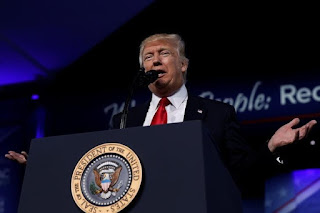 Trump's budget could care less about Democrats, Republicans, or politics in general.  It's the people's budget, full of his campaign promises.  Where he promised something would increase, the money went up.  Where he promised to reduce spending, the money goes down.  And, he's saying he will get our country funded in a manner a business is...cutting the fat, cutting unnecessary spending, and making it a well-oiled machine.

And the Democrats are ticked off and out of their minds.  The White House plan includes an increase in defense and national security spending by $54 billion (a 3% increase from Obama's numbers), and Trump plans to cut the same amount from non-defense programs.

Trump says "we have to start winning wars again," and "peace through strength."

No, Trump is not the new Reagan.  He's Trump.  But, he seems to be more Republican in what us Reagan supporters remember, than anyone else in the Republican Party.

How did the Republicans become so unRepublican?

President Trump is also going to propose a $10 trillion spending cut over ten years – or $1 trillion per year. This is entirely reasonable considering the scale and scope of government.  Back during the tale-end of Dubya's presidency, a friend of mine and I went through the federal budget and determined that 85% of federal spending is unconstitutional.  While I don't believe we should pull the rug out from under Americans on all of those things, but rather reform slowly until the federal government is removed from things it has no authority being involved with, a reduction in spending with the word "trillion" attached seems like a wonderful start.

President Trump’s economic plan is based on a conservative prediction of economic growth being at 4% (which is still robust when compared to Obama's one-percenters).  Four percent growth equals an additional $1 trillion added to GDP.  The tax revenue from the GDP growth is $200 billion/per year (1/5th of $1 trillion). Or $2 trillion over the 10-year projection.  And to be honest, with tax cuts coming, the growth will likely be even greater because the tax cuts will encourage investments, new businesses, and expansion of existing businesses.  And, with more people making more money in an economy designed to fuel the free market, tax revenue will be even greater than anticipated. . . I am anticipating.

-- Political Pistachio Conservative News and Commentary
Posted by Douglas V. Gibbs at 8:59 AM