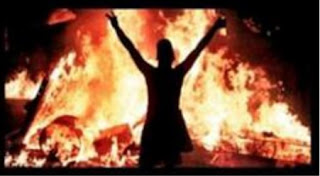 When you give gifts from the treasury to a people, and they become dependent upon government "entitlements", the only result when the quantity of the poison being administered to the public is reduced is addiction withdrawal and violence.

When it comes to Marxism, and other leftist ideologies, the reaction when one doesn't get their way, or a political opponent dares to declare ideals different than that of the mob, is a temper tantrum of a massively violent magnitude.

The thing is, such mob violence is not only the trademark of Black Lives Matter and today's liberal leftist snowflake population.  I am not talking about America's snowflakes who are whimpering and whining because as pawns they've been taught to be a bunch of crybabies by the liberal left establishment when they don't get their way, or they don't receive a participation trophy.  The violence is like what we saw in Greece, when due to lack of funds, the gifts from the country's treasury was forced to be reduced.

In Brazil there is more to it than just austerity, and violence.  The government, like Venezuela's, has been chasing a utopian dream of socialism, and with the socialism came corruption, and with the ideology came failure.

This is what happens when liberal left progressive socialist principles are followed. . .

In Venezuela, faced with a collapsed system and rising authoritarian policies, even the poor who originally adored Hugo Chavez for his socialist policies, are hungry, angry, and becoming violent.