Gunman Opens Fire at Hospital in The Bronx, New York 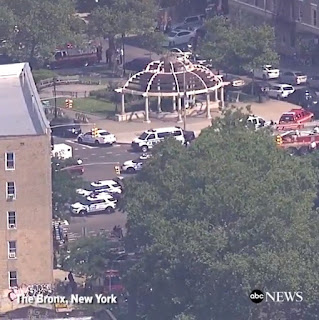 The shooter killed himself in the end.  The shooter was a doctor (and was dressed like one, lab coat, and all) who no longer works at the facility in New York City.  In addition to his own death, he killed a woman, and wounded six others.

The body of the dead woman was near the body of the dead gunman.  Could it have been a lover's quarrel?  Or were they unrelated.  Did the doctor go postal over not working there anymore?  At this point, we don't know.  No motive has been determined.

The early afternoon shooting began around 3:00 pm at the 972 bed facility, one of the largest hospitals in the area.

CNN began their article on this story stating the gunman was using an "assault rifle."  Any rifle to the mainstream media is an assault rifle.  The report that an assault rifle was used is likely a lie, fake news, because in reality, an assault rifle is a fully automatic rifle, or one that can be switched between single shot, semi-auto, or automatic.  Those rifles are only available to the members of our military for military operations.  I doubt the doctor was wielding such a rifle.