Houston: As the Hurricane Waters Drain 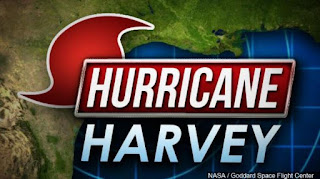 Hurricane Harvey got all the way up to Category 4 by landfall, and thanks to two fronts squeezing it in place, the hurricane slammed into the Texas Coast twice, and then it lingered over the fourth largest city in the United States.  Houston was devastated, flooded with more than 50 inches of rain, and has suffered largely from the flooding more than three dozen deaths, so far.  The images are incredible, and the stories are amazing.  My prayers have been going out to those on the Gulf Coast, from Corpus Christi, to Houston, and to all points east along the coast slammed by this horrific hurricane.

I have friends in Tyler, Corpus Christi, and San Antonio, Texas.  Each have their own stories, with Corpus Christi being the most amazing.  San Antonio got heavy rains, high winds, and Hurricane Harvey was just an irritant.  In Tyler, a swollen river and the threat of a dam being compromised put them on the edge of evacuation, but now the town of a little over one hundred thousand residents due north of Houston with about two hundred miles between them is serving as a center for receiving evacuees, and giving aid as needed.  Corpus Christi was hit pretty hard, but with Houston's story in the news (and for some strange reason, some idiotic story about Melania's shoes. . . really?  The media can't attack Trump about his handling of the disaster so they go after what shoes Melania was wearing when she got on the plane to go there?), Corpus Christi (and Galveston) has not really been talked about much.

Corpus Christi bore the brunt of Hurricane Harvey when the storm made its first landfall with 130 miles per hour winds.  All of Corpus Christi lost power, but the crews got 95% of the customers back with electricity fairly quickly.  Arial photos reveal the damage in the coastal Texas City, but Corpus Christi was spared much of the flooding because the hurricane moved out and headed up the coast, rather than remaining in place over Corpus Christi like it did to Houston.  The flooding is where the death toll rises, with 9 out of 10 deaths in these kinds of storms coming from the flooding.

Here's the latest according to Drudge:

-- Political Pistachio Conservative News and Commentary
Posted by Douglas V. Gibbs at 11:21 AM