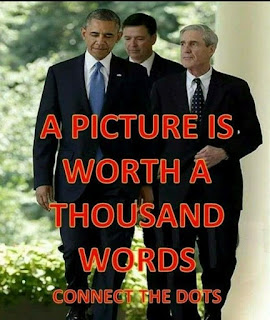 Deep State operatives dominate the FBI.  They have never worried about discovery.  They believe they are too big to indict, and that they are somehow above the law.

Except, now, the FBI is under fire, and under examination, and the liberal left's wagons are circling the agency, not only to hide the corruption, but to keep the public from learning that a secret society of leftism is running rampant through the nation's top bureau of investigation.  They are trying to even blame the Russians for the FBI's crimes, but fall short drastically.

As the investigators got close, text messages disappeared, and the members of the secret society clammed up.  The circumstantial evidence says the FBI under Obama was also complicit in using illegal activities and an abuse of power in an attempt to defeat Donald Trump in 2016.

The FBI used the fake Russian dossier to go after Trump, an excuse planned for and paid for by the Clinton Crime Family and the Democratic National Committee.  All signs point towards the FBI using the dossier to get FISA court warrants to spy on Trump associates, meaning it used the opposition research of the party in power to convince a court to let it spy on the candidate of the other party — likely without telling the court of the dossier’s political link or false foundation.

And with it, the FBI, and the Obama administration, turned over classified information about Trump to the Clinton campaign for the purpose of getting her into the White House so that the secret society and the underground corrupt network of power and money could continue.

In short, Trump was right, Obama aides wiretapped his phones at Trump Tower.

So, while the Democrats have been screaming "Russia, Russia, Russia," the truth is, the real problem is "Democrat Fraud, Democrat Lies, and Democrat Corruption" wrapped up nicely by the FBI.

Text messages have been among the primary pieces of evidence revealing what has been going on.  In one text message, an agent suggests that Attorney General Loretta Lynch knew while the investigation was still going on that the FBI would not recommend charges against Clinton.

Evidence the fix was in.

James Comey was knee-deep in it all, and it was in the office of Comey’s top deputy, Andrew McCabe, where agents discussed an “insurance policy” in the event that Trump won. Reports indicated that the Russia collusion probe was that insurance policy.

The text was from Peter Strzok, the top investigator on the Trump case, and was sent to Lisa Page, an FBI lawyer and also his mistress.

“I want to believe the path you threw out for consideration in Andy’s office — that there’s no way he gets elected — but I’m afraid we can’t take that risk. It’s like an insurance policy in the unlikely event you die before you’re 40 . . .,” Strzok wrote.

Strzok, who called Trump “an idiot,” was the lead investigator on both the Clinton and Trump cases.

Special counsel Robert Mueller wound up removing Strzok and Page from his probe, once the text messages were made public ... but both still work at the FBI.

Jeff Sessions, as attorney general, has targeted the FBI for exposure.  The House of Representatives is also seeking the truth.  Nunes prepared a four-page memo, based on classified material that purportedly lays out what the FBI and others did to corrupt the election.

The memo has not been released, yet, but it's only a matter of time before America sees the shock heard 'round the world.

That all said, it is the text messages that really reveal the presence of an FBI secret society.  While the allegations of shocking and substantial government surveillance abuses under President Obama outlined in the FISA abuse memo has been the big news of late, as has been the FBI losing five months of key text messages between the anti-Trump/pro-Clinton FBI officials Peter Strzok and his mistress Lisa Page (which were finally, later, found), the real shocker is that in those text messages is talk of a "secret society" of officials within the FBI who met the day after the election of Donald J. Trump to plot against the president-elect.

While members of Congress have seen Nunez's memo, the FBI hasn't.  The "secret society" needs to be exposed in a proper way, so that the exposure can follow a path that eventually will enable full exposure, and so that appropriate legal disciplinary action measures will be taken.

The attacks are across the board, be it against those involved in national security, or lying about Martin Luther King just to push the Democrat message of failure by design.

Since both of the guys in the background are life long friends of the Bush Family; and were made heads of the FBI by ""W" I think you have photoshop the pic! Right? It is really #43 not #44.

Perhaps you can do some research on the young man shot to death that worked for the DNC. Apparently the FBI is not interested in his murder. I think he was the leaker of the DNC emails. I understand it was determined that the data rate of removal of the emails had to be done with a thumb drive. That means it was an employee that did a leak. The young man worked for the DNC, and young Democrats were for Sanders, that might have been his motive.