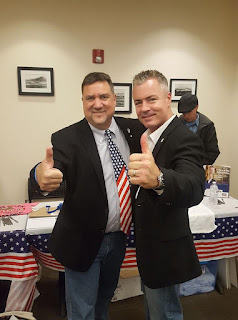 The Democrats and John Cox are joining forces to stop, once again, a conservative candidate from having a chance in California.

In a recent email, the following argument was made:

OMG! I can't believe you guys are falling for this! Why do you think the Democrats would PAY to attack the REP front runner on behalf of his lagging primary opponent? I'm SURE it has NOTHIING to do with our Prop 14, first two past the post primary system. Couldn't be that currently the first two would put Cox into the final election, UNLESS they can pump up Allen's anemic numbers, and get ViaGROSSa into second place. BTW, Newsome campaign ALSO doing the same. Nice to have union money to throw around, no?

In 2014, Neel Kashkari was the moderate with more money than the more conservative, Tim Donnelly. Kashkari got into the top two, and then lost badly.

In 2010, Meg Whitman was the moderate with a lot more money than the more conservative Steve Poizner. Meg squared off against Jerry Brown in November, and then lost badly.

In 2003, Arnold Schwarzenegger was the moderate with more money than the more conservative Tom McClintock. Arnold won, but as a moderate Republican he turned out to be a disaster.

Now, we are being told, once again, that we must do the exact same thing.

In 2018, John Cox is the moderate with more money than the more conservative, Travis Allen.

Based on history, if we listen to the maddening cry that is saying Cox, the moderate, is the only Republican who can win because only moderates can win in California or because he has more money, or if we are willing to listen to the mud-slinging non-truths designed to convince us not to vote for the conservative, Travis Allen, and that voting for Allen is a bad thing because it will split the vote based on polls by pollsters who told us Trump had no chance and Hillary Clinton was an inevitability, then we are fools.

What is that saying about the definition of insanity?

The definition of insanity is doing the same thing over and over and over, and then expecting a different result.

The claims that Democrats are trying to prop up a Republican in the race means they are nervous. The claims that Democrats are pumping money into Travis' campaign, if it is true, does not mean that Travis is any less conservative. It means that the Democrats believe the same polls that have Cox ahead of Travis Allen that said Hillary was a shoe-in and Trump had no chance. Non-mainstream polls, and polls of Republicans only, have Travis Allen heads and tails above Cox.

Even some of mainstream polls has Allen allegedly within striking distance, despite the manipulations of the polls we know happens in the hands of the leftist media.

Travis Allen is the Donald J. Trump of the race for Governor of California, and will pull this off if we don't believe the leftist media and the leftist establishment conventional wisdom that screams about the polls, and every election falsely declares to us that only a moderate Republican with lots of money can win in California.

Are we, as GOP voters, really willing to fall for that, and sell our souls by turning our back on the conservative candidate because we are willing to throw our lot in with the moderate that, historically, is doomed to lose, or be a great disappointment?

Today, I will give you the chance to hear from Travis Allen on this.

In a pre-record for my radio program on KMET 1490-AM in Southern California (airs at 1:00 pm Pacific www.kmet1490am.com), I will be interviewing Travis Allen for half an hour this morning on my old BlogTalkRadio page.

-- Political Pistachio Conservative News and Commentary
Posted by Douglas V. Gibbs at 8:56 AM

I really Travis Allen too but Trump endorsed cox and I didn't want to split the votes. I'm afraid to Cox will not win against newsom as bad as he is. Cox just doesn't have enough fire in his belly like Travis. I hope he better wake up and smell the coffee and start fighting like a mad pitbull bc that newsom guy is nasty against president Trump.