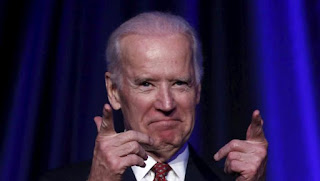 Joe Biden has experienced both time at the top of the polls, and time plunging like a dying bird, in the early dawn of the next presidential election season.  Creepy Biden is often full of ignorant rhetoric, and un-American ideas, so when he says something correct, especially about President Trump, it demands pause.  In an attempt to remain mainstream, yet, simultaneously appeal to the radical leftist wing of the Democrat Party, his flip-flops and incoherent speech transcripts usually cause more confusion than hope for the future of America through a Biden presidency.  However, recently Mr. Biden nailed the truth to the wall for all to see, getting it exactly right when he launched an accusation against President Trump ... little does he know, he was right in a manner he, and his base, will likely never understand.

"Our democracy is at risk.  I never thought I would say those words.  But it's true.  Everywhere you turn, Trump is tearing down the guardrails of democracy," said Biden.

I wish I could have run up to the place where Biden was speaking into that microphone to pat him on the back and congratulate him on such a wonderful statement.

The problem is, he followed his statement with a sentence that wasn't exactly true, ruining the moment.

Realize, those words came out of the mouth of the man who served as Vice President of the United States under President Barack Obama, one of the worst abusers of presidential power in history.

When we recite the Pledge of Allegiance we don't pledge to the flag of the democracy for which it stands.  The United States of America, a voluntary union of states who came together to form a mighty country, was never intended to be a democracy.  The Founding Fathers designed our system to be a republic, and a very unique one at that.

A republican form of government, from the Framers' point of view, goes way beyond today's feeble definition of a republic.  If you ask the average person what a republic is, they will say that it is a government that uses a system of representatives for the people.  They may even add that we are a "democratic republic," which is also very false.

While the United States does enjoy a system that uses a representative model, not only at the federal level, but all the way down through the States, counties, and municipalities, in truth much of that model is not operating, nor is populated, in the manner originally intended.  In truth, the representation aspect of our government was supposed to be a minor part of what makes us a republic.

First, and foremost, what makes us a republic is the fact that we operate (or, at least we are supposed to operate) on the concept of the rule of law, rather than the rule of man.  In other words, the laws of Nature, and of Nature's God, which are self-evident, endowed upon us by our Creator, and are unalienable, are more important than the uninformed vote or radical opinions of We the People.  While the voice of the people, and the will of the people, are important to a certain degree, representatives are not supposed to be tasked with doing everything their constituency demands.  Upholding the U.S. Constitution and the rule of law are more important than the whims of the mob.

I can't count how many times I have talked to a representative, and he or she told me, "I was elected in a liberal district, and I represent those people too, so I have to be more moderate as a result."

If the constituency is demanding policies that are unconstitutional, the representative's job is not to betray the law of the land because the people told him to.  To bend at the will of the people is a the kind of thinking you see in a democracy.

So, yes, Biden, Trump is an existential threat to democracy because he understands there is more to our system than the will of the voters, and our representative system.  The interests of the States also matters.  The rule of law, and the constitutional principles penned in our founding documents, matter.  While Trump is being called a "populist" president, in my opinion, as I watch his presidency continue to make its journey through history, I realize in reality he is the "republican form of government" president (please don't confuse my use of the word republican with the "republican party" variation ... among my joys is that he is not a republican president in the ideological sense, nor a politician, for that matter).

Trump is correct.  Biden is a dummy.  He does not understand the dangers of democracy, and its not-so-distant cousin, mob-rule.  Democracy is the road to socialism, and eventual collapse.  What we need to do is return to being a republic, and to be honest, President Trump has made more inroads in that direction than any other president in my lifetime.