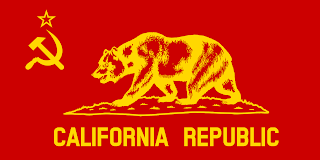 California is not as blue as everyone seems to think.  Yes, the Democrats have a super-majority.  Yes, the Golden State's GOP tends to try and act like Democrat-lite.  But, despite popular opinion, I do not believe conservatives are in the minority.  We just think we are.  Remember, this is the State that voted in favor of Proposition 8, which established marriage as being between a man and a woman . . . later unconstitutionally overturned by a lone gay federal judge.  Unfortunately, the leftist propaganda game has California Republicans so rattled that they have lost sight of the truth, or any sight of hope.

The legislature is essentially controlled by Democrats because of the big cities (population centers full of people who are dependent upon government gifts from the treasury, so they vote for the party that mostly promises a continuation of such soul-killing programs), and areas where the conservative voters feel so defeated that they don't even go to the polls during elections.

Could you imagine what would happen if the gun owners and Christians all voted, and voted their values?  California would flip in one election.

The question is, how do we convinced those who have decided not to vote to believe they can make a difference and head to their polling place on election day?

--  Political Pistachio Conservative News and Commentary
Posted by Douglas V. Gibbs at 2:04 AM

"Could you imagine what would happen if the gun owners and Christians all voted, and voted their values? California would flip in one election."

Welllll...Caveat here: This ASSUMES that these Christians and Gun Owners are NOT Progs. Because after all, it only takes ONE issue to FLIP an otherwise Patriot voter. One issue that is MORE dear to their heart than their Right to Keep and Bear, or sadly in MANY cases even their Faith!

We all know those who LOVE to post Patriotic stuff on TwitBook, etc but we KNOW that they voted Obama and Clinton because of That One Issue (Usually Abortion or Racial Preferences, but sometimes they have a gay relative or friend. Stuff like that, and it's different from voter to voter...). Of course the easiest way to flip a voter is to put a Government CHECK in their hands. KaliPornYa has YUGE numbers of ALL these Wobblies.
If any one can win them BACK, it would be Trump! He needs to come to KaliPornYa ASAP!!!

Conservative, Christian gun owners don't bother voting because their votes won't get "harvested" properly.
We left Maryland for the same reason people are fleeing CA.
And a host of other repressive states are experiencing the same exodus.
Call me cynical, but pie in the sky utopian ideas about rebirthing the conservative movement are a waste of time.
We are outnumbered. Conservatives have too many scruples to win more elections. We're not willing to cheat and steal like the other side, which is good but we will lose the election battles as a result.
The only struggle we will win is an armed one, and that could be close at hand. Be prepared.

How do you know how many Christians?

https://books.google.com/books?id=zd0nDBb6VYYC&pg=PA26&lpg=PA25&ots=9yOtIcEN-1&focus=viewport&dq=estimated+turnout+evangelicals&output=html_text in this survey about half voted ... earlier in the book it states it is referencing among registered voters. That said, there have been some surveys that have shown that in the last three presidential elections the participation in voting by Christians may have increased.