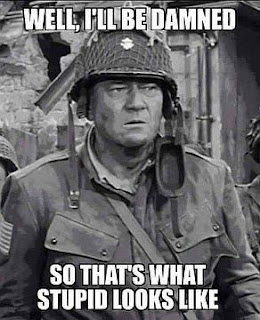 I find it fascinating how easily the political members of the liberal left get ticked off when faced with someone of the opposite political persuasion.  In many ways, it encourages my activism, not only because of my desire to protect liberty and spread my own political message, but because it is kind of fun watching the Democrats running around in circles with their hair on fire.  That's why, when I can, I get a kick out of driving my truck, which has four bumper stickers on the window ("U.S. Constitution Trumps Socialism," "2nd Amendment: The right that secures them all," "Defend Liberty," and "Trump: 2020; Keep America Great") in front of people with Bernie stickers, or Coexist stickers, or other stickers with left-wing messages.

Sometimes, however, the lefties do more than simply flip me off with their middle fingers.

Yesterday, late morning, a woman in a blue sedan with "I'm with Her: Hillary 2016" and "Go Vegan" stickers (I wanted to shout, "I love animals, too, right next to my mashed potatoes") did more than flip me off.

After getting a naked flash of my back window all up in her goggles, she sped around beside me, rolled down her window, and in addition to the flying fingers of "F-You", she decided to scream and freak out and yell at me at the top of her lungs.  My windows were up so I have no idea what she was screaming, but when I glanced over and smiled and winked it looked like a lot of the words flying out of her pie-hole began with the letter F.

Then she hit her brakes to get behind me again, continuing to fling finger gestures when she was physically capable, almost enabling the car behind her to nearly slam into her hind-quarters.

When I continued along my way with her behind me and I hit my left signal and pulled into a left-turn lane, she followed me.

Was I being stalked?

Rather than make my usual right turn two streets short of my house, I turned right at the first opportunity.  She followed me.  Then I went into a neighborhood further up from mine, and she followed me.  Finally, she got tired of tailing me and vanished, after which I cautiously, with eyes pealed, drove home.

The whole situation created a line of questions in my head.  Was she willing to follow me to my house and continue to harass me?  Was she dangerous?  Would she now search neighborhoods for my truck?

I am leaving for Oregon early this morning, so there will be no truck to find at my house for a while.  I advised my wife, and left her with one of my firearms, loaded, with plenty of ammunition...just in case.

-- Political Pistachio Conservative News and Commentary
Posted by Douglas V. Gibbs at 3:00 AM