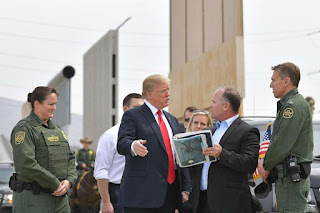 Senator Mark Warner D-VA is one of the voices among the Democrats that is claiming President Donald Trump is acting unconstitutionally when it comes to how he is funding the wall he promised to voters along the country's southern border.  Senator Warner joined Fox News' Neil Cavuto on his program, "Your World w/ Cavuto" this afternoon to make his case about the President's unconstitutional activities.  During the interview, Warner stated that President Trump can't simply spend money as he pleases because the U.S. Constitution is clear in Article I, Section 1 that any appropriations authority belongs to Congress, not to the President.

First of all, the "power of the purse-strings" clause is in Article I, Section 7; and it gives the origination of those bills as being a sole authority of the House of Representatives.

If the Democrat Senator can't even get the location in the Constitution of the authority right, how can we believe that he knows what he is talking about at all when it comes to any issue's constitutionality?

If he's going to claim to know the Constitution, he needs to get the location of authorities right.

I don't think the liberal left's complaints about Trump's use of national security funds for his promised border wall find their foundation in their question of constitutionality.  They simply disagree with him, and wish to do as much as they can to stop him due to their desire to obstruct.  One of their consultants recommended using the constitutional apportionment argument, and I am thinking that Senator Warner didn't even know that authority was in Article I before they came up with their plan of opposition, much less what section the authority lies.

In fact, when a Democrat is in the White House, they claim the Constitution is an obstacle to his abilities to do what he wishes as President of the United States.  Their opinion regarding limitations on federal offices changes when the party controlling that office changes.  It's amazing how constitutional they claim to be when the GOP grabs the reins.

This is an excellent write-in or call-in to the Senator's Office "schooling" him on this issue. Plus, didn't the court just rule that Trump had the right to use these military funds anyway? So Senator Mark Warner (D) Virginia, we'd be happy to send you a pocket Constitution for just such an occasion! Here's his contact link folks: https://www.warner.senate.gov/public/index.cfm/contact