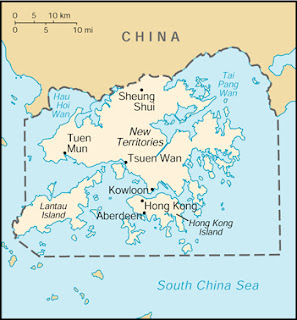 In the United States the Democrats are doing what they can to move us towards greater dependency upon government.  They ignore the lessons of communism, Cuba, Venezuela, Detroit, and California.  The reality is the big government policies of the liberal left progressive socialist commies fail, and have been a failure, everywhere they've been tried.  The problem is, freedom loving Americans, who tend to be registered Republican, are not willing to fight hard enough to stop them.

With freedom comes responsibility.  It must be fought for, maintained, and taught to the next generation.  Liberty requires responsible decision making, rather than the "government will give you everything" attitude of the Democrats.  Without Americans being responsible for their own decisions, because government does it for us, the inevitable result is always bondage, and tyranny.

True freedom requires an irate, tireless people who are willing to fight for it.

Hong Kong was under British Control for a century.  Over the last twenty years the very prosperous city based on principles of economic freedom has been under the political umbrella of Communist China.  China, at first, for the most part left the city alone, not wishing to monkey with its place in the world as a financial and banking hub.  Of late, however, China's desire to exert control over the city, has increased.

Among the acts of tyranny against Hong Kong, the communist Chinese were putting forth an extradition bill that would enable the extradition of Hong Kong residents to mainland China.  The bill sparked protests that have now been going on for over three months.

There have been a number of confrontations and arrests.  These events have drawn concern from U.S. and European officials.  The fears include that the extradition bill may erode Hong Kong’s autonomy, which was guaranteed when the territory reverted from British to Chinese rule in 1997.

The Chinese government has accused members of the local political party Agnes Chow and Joshua Wong of inciting and participating in unauthorized assembly.  The assembly in question was a massive protest on June 21 when thousands of Hong Kong residents surrounded the police headquarters where the pair was being held to demand their release.

Ivan Lam, the chairman of the political party in Hong Kong, Demosisto, who is currently outside Hong Kong, was also charged with inciting an unauthorized assembly.

District councilor Rick Hui and Andy Chan, founder of a political party that advocated for Hong Kong’s formal independence called the Hong Kong National Party, were also arrested. The party has been banned by the government. Police have not disclosed their charges.

The protesters have called for free elections, five years after Beijing formally made an announcement denying universal suffrage in Hong Kong elections.  Currently, candidates for the city’s top official position are hand-picked by Beijing, and voted in by an electoral committee comprising of mostly pro-Beijing elites.

Hong Kong leader Carrie Lam recently withdrew the controversial extradition bill.  "We must find ways to address the discontent in society and look for solutions," Lam said in a a video statement. "After more than two months of social unrest, it is obvious to many that this discontentment extends far beyond the bill."

Lam refused to give ground regarding the protesters' four other demands, however.  With the communist Chinese government standing with her, she continues to deny greater democracy for the city and an independent commission into police conduct, saying all investigations would be carried out by the existing Independent Police Complaints Council (IPCC).

The largely Christian protesters have appealed to the U.S. government to pass legislation in support of the city’s autonomy.  At one recent protest the Hong Kongers waved American flags and sang our national anthem, the “Star-Spangled Banner.”

The United States continues to deal with Hong Kong as if it is a sovereign and separate entity from mainland communist China.  This includes an exemption of Hong Kong from President Trump's recent tariffs against China regarding trade.

U.S. officials are considering a bill recognizing Hong Kong as an autonomous entity.