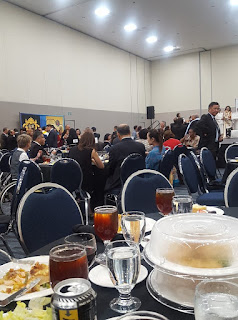 I was at the Anaheim Convention Center earlier today for an event that basically unites global dignitaries and humanitarians in a front against communism, and global poverty.  I was asked to take the stage at one point, and so I spoke shortly about our veterans at the event, explaining that it is because of the American troop that other countries in the world have the opportunity to possibly taste liberty in their own lands.  While the U.S. Constitution was written to establish American Liberty, it was also a document written for the rest of the world.  The Framers hoped that the example of American Liberty would become something other countries would wish to emulate.  America planned to spread its message not by conquering other nations through empirical means, but by setting an example for others to follow.

"Communism is not the future hope for the world.  Liberty is," I said in conclusion.

The largely Vietnamese audience applauded as the final words dripped from my lips.

Following the expo a Gala dinner was held.  The organizer of the event is a friend of mine, so he gave me, without expecting anything in return, one of the $500 tickets to get in.  The dinner was not bad.  A small filet of fish (salmon, I think), asparagus, and a mystery vegetable that looked like carrots, but tasted like something else altogether.  My table was sparsely populated, at first.  I was alone, until a friend of mine who was assigned to a different table decided to join me.  Later, the emcee, a spokesmodel who stood on stage next to the emcee to add a little beauty to the scene, and their significant others, also joined my table, along with the organizer's right hand man (who was also in charge of crowd control, it seemed), and a lovely woman who ate, and then left to mingle.  The company I had turned out to be a pleasure to talk to.  I handed out business cards and flyers regarding what I do, and perhaps made a couple new friends along the way (the spokesmodel's husband being the one I really got to know well).  While the conversation at my table wound up becoming an enjoyable part of the event, the atmosphere of the gala dinner was almost comical.

With so many people who hold titles of some kind at the event, they all expected to be announced, and fawned over.

Don't get me wrong.  I have respect for those who have reached important offices.  World leaders (and former world leaders) filled the room. I spent a moment speaking to a general (in full uniform) who escorted the former female president of Cambodia. The room was filled with leaders, princesses, reverends, monks and other important people of all kinds, including a few from the alternative media.  More than half the room participated in the grand entrance, with a smattering of us lower folk encouraged to clap and make over their entrances for the cameras.

Again, I am not mocking people's positions.  I am simply amazed at how much they demand to be recognized for those positions.

Humility was not a commodity that dominated the room.

A red carpet was laid out, and the long, flowing dresses and suits with sashes draped across them, entered one by one, and then paused for a photo opp.

My friend commented I ought to be among the group of important people.  I simply smiled, and shook my head.  "No," I replied.  "They can keep all of that pomp and circumstance.  It's not my thing."

I don't do what I do regarding the Constitution and defending liberty because I expect a pat on the back, or a bunch of people to kiss my feet.  I do it because I love my country, I appreciate liberty, and I feel like the Lord has put me in the position I am in to carry out the task.  Maybe that's why I am not flush with funding.  It's more of a ministry to me, than anything else.

But, I participated in the pomp and circumstance from an audience-member vantage point, applauding when it was expected, and bowing my head in greeting when I met the higher ranking VIPs.

Then, when it was all over, and everyone's shoulders were sore from patting each other on the back, I walked alone to my humble little pick-up truck, dropped on the passenger seat a couple artifacts I had collected during the progression of the evening (a couple woven bags, rice paintings, and a music CD), and drove home as I listened to a local classic rock station.

The memories of the event are good, and the organizer, Tony Nguyen, long ago earned all of my respect and love.  Princess Maria, too, is a fantastic individual, and I am proud of her for establishing the series of award banquets (which she started through the United Nations, but they kicked her out when they realized it was largely anti-communist), but to be honest, the pomp and circumstance, and the less-than-filling extravagant meal left me a little short in the "food in my tummy" category.  A quick two dollar double cheeseburger and a root beer, right before I got on the freeway to head home, did the job.

Meal of champions, if you ask me.