Oregon Trying to Follow Virginia to the Dark Side 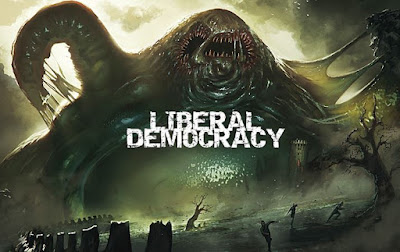 California is in shambles.  The politically dark blue legislature has done more damage to California's state of freedom and economic health than the lefties were able to accomplish in Detroit.  California is on the way to becoming a U.S. version of Venezuela; a failed, dreary socialist dystopia drowning in its own filth and unsustainable promises.

The State of Virginia, recently, thanks to democracy (certain components of being a republic have been taken away, which has enabled this madness ... I'll explain later in the article what I mean by that) went full on Democrat Majority, and among the most egregious laws the commies of the party of the donkey have put into place have been nasty gun control laws that are ready to move into full on gun confiscation mode.

The people of the largely rural and conservative State (save for Norfolk, Richmond, Arlington, and a few other populated areas) responded by telling the Governor and his Democrat Party henchmen that they refuse to comply with the totalitarian gun laws.  The Democrats have responded by promising to slam their laws down everyone's throats with an iron fist, largely through the governor's mishandling of the National Guard.

The State of Oregon, largely thanks to the hard-left voters in the Portland area, has offered a number of draconian gun laws as well, but so far the largely rural State has not chased the worst of them.  However, many of the other laws that echo the madness of California's dark-side have worked their way through the hoops and hurdles of the legislative process to become law.

Based on the man-made climate change hoax, for example, Oregon has essentially outlawed plastic straws, and gone from the flimsy plastic grocery bags to the thicker reusable ones that nobody reuses.

Once you study what is going on, however, the foundation of the problem is not so much with the liberal left as much as it is with the unconstitutional idea of our States operating as pure democracies, which makes both sides guilty of causing our problem.

The Framers of the U.S. Constitution, with 20/20 hindsight into history, determined that while some democratic processes in our American system of government were necessary, and even a good thing, our system must not be a pure democracy.  When it came to the will of the people, just like other parts of government, a system of checks and balances needed to be in place.  Our republic was formed to ensure that there was a proper distribution of power between We the People, the States, and the savvy political class.  No group was to have full power.  The power was intended to be shared, with each group serving as a check against too much ambition by any of the other groups.

Article IV., Section 4 of the U.S. Constitution states that "The United States shall guarantee to every State in this Union a Republican Form of Government."

What does that mean?

Obviously, they did not mean in that sentence a government run by "Republicans", in the political party sense.  What they meant was that the States must be republics, not democracies, oligarchies, theocracies, or any other non-republican form of government.

In our system of government, at both the federal and State levels, we have dual constituencies, with We the People existing as only one part of the overall whole.  At the Constitutional Convention, for example, it was not just We the People that the delegates in that convention represented, but they were also representatives of the States, and the overall interests of the States.  This is why originally the only part of the federal government that was democratically voted into office were the members of the House of Representatives.  The President was elected by Electors who were appointed by the State legislatures, and guided by the lobbying efforts of We the People; and the Senators were appointed by the State legislatures.  The House was the voice of the people in the federal legislative process, and the U.S. Senate was the voice of the States.  Since the representatives of each House of Congress received their seats through a different process by a different constituency, it made the two houses of the bicameral congress different from each other, viewing each issue from a different angle; a healthy way to operate in a republic.  While democracy was used to elect the members of the House of Representatives, the whole body (including the U.S. Senate), was created through a republican method, rather than pure democracy.

The State Senate districts were the county lines, with one Senator per county, regardless of population (as with the U.S. Senate where it is two Senators per State, regardless of population).  However, that was semi-permanently changed by the federal courts (an unconstitutional action in itself) in 1964 when the Warren Court ruled in Reynolds v. Sims that Alabama, and therefore all of the other States, could no longer have the counties appoint State Senators because, in the opinion of the court, the method established by the Founding Fathers is undemocratic.

The court violated Article IV., Section 4 of the U.S. Constitution.  It does not say that the United States shall guarantee to each State a democratic form of government.  It calls for the federal government to guarantee a republican form of government, which must include the counties appointing the State Senators, rather than them being voted in democratically by gerrymandered districts that have rural senate districts consisting of multiple counties, and Los Angeles County being the home of more than a dozen state senatorial districts.

The Founding Fathers understood that tyranny always rises out of population centers, so they did all they could to ensure the rural voice had a little help against the totalitarian march of mob-rule, a.k.a. democracy.  Thomas Jefferson even suggested that the United States should do what it could to be a largely agrarian society, so that large cities did not overpopulate the landscape, and threaten to steal liberty with their communitarian ideas.

Which brings us back to California, Oregon and Virginia.  Because of democracy these largely rural and conservative States are being manhandled by the hard-left socialist oligarchs and uniformed voters of their large cities.  Because of pure democracy these States have become leftist dystopias where the socialists of the population centers dictate to the rest of the State what they can or can't do, with those policies largely standing against the interests of the rural areas, and completely slamming liberty for all in the face with a socialist iron fist.

If we wish to take back our country, and get it back on track with the U.S. Constitution, then, our primary fight must be to return our system back to a republican form of government, and stamp out pure democracy.  That means repealing the 17th Amendment (which would return appointment of the U.S. Senators to the legislative bodies of the States), and overturning Reynolds v. Sims, which would return the method of seating the State Senators back to appointment by the counties.

Instantly, democracy would be on the run, and socialism would be defeated.

Otherwise, the disease that has spread to Oregon and Virginia from hard-left California will continue, and America will continue its slow, goose-step march towards socialism, oligarchy, and ultimately the demise of liberty.

Unbelieveable out of touch low-info fully indoctrinated "useful-idiots" have no clue what Americanism as Founded actually was/is.