The State of Virginia's Guns 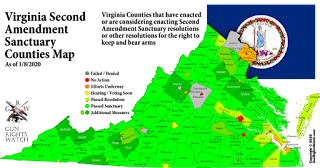 The Democrats desperately want you to believe that gun-owning, gun-toting conservatives are dangerous, violent, and only want their gun rights protected because they are racists who wish to kill anyone who doesn’t agree with them.  In 2009 a smattering of lefty commentators and politicians portrayed the Tea Party rallies as gatherings of violent protestors driven by racist rage against President Barack Obama.

Now, the same tactics are in play in Virginia.  The mainstream media’s coverage of pro-Second Amendment protests that took place in Richmond, Virginia reminded me of their coverage of the Tea Party protests and rallies.

The Virginia rally was a response to the gun control policies of Governor Ralph Northam and Virginia’s lately bright blue legislature.  Northam, participating in the hysteria, called for a “state of emergency” in response to the protest, and numerous media outlets predicted it would be marked by “hate” and violence, and overall would be a menacing and sordid affair.

But, no violence took place, and it appears that only one person was arrested for violating an anti-mask prohibition put in place by the governor.  There were no lawbreakers, no white supremacists, and the grounds were cleaned up by the rally-goers, leaving the site cleaner than before they had arrived.

Pretty impressive, given that the crowd reached an estimated size of over 20,000 on a very cold day.

Good going, Virginia, you once again showed the liberal left the class and level of responsibility gun owners are really all about.

On a side note, thanks to the leftist attack on Virginia, I predict in 2020 the State will not only vote for Trump, but will swing their legislature way back over to the Republican column.