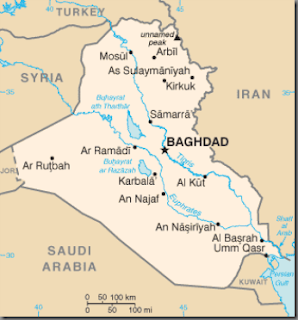 What had the potential of becoming a Benghazi situation under Trump's watch, thanks to quick action, became nothing of the sort.  A protest at the U.S. Embassy in Baghdad, believed to be backed by Iran, began as a frightening reminder of the danger to Americans in the region.

As the violence in Baghdad escalated, Iranian leader Ayatollah Khamanei sent a tweet to President Trump saying there was nothing he could do to get back at Iran for leading the attack on the U.S. embassy in Iraq.

Iran has already been under sanctions that has created unrest in Iran, so, from the Iranian leader's point of view, Trump retaliatory weapon's chamber was empty.  What was he going to do?  Send a failed rescue attempt to free hostages like Jimmy Carter did back in 1979?  Would he stand confused as he watched the death of Americans on satellite images like Obama and Hillary Clinton did during the Benghazi situation?

Trump believes in peace through strength, so he loaded the chamber, and hit back.

Two airstrikes later Khamanei was no longer so bold. Iranian Gen. Qassim Soleimani, the head of the Islamic Revolutionary Guard Corps' elite Quds Force, was one of the Iranian leaders killed in the attack at Baghdad International Airport.

The quick strike response to Iranian aggression at our embassy was a move unexpected by the Iranians, and while the plan is not to put American troops into another drawn out war in the Middle East, Trump's White House is on high alert should there be an Iranian response.

Soleimani has been labeled by Secretary of State Mike Pompeo as being equally as dangerous as ISIS leader Abu Bakr al-Baghdadi, who killed himself in October during a U.S. raid on a compound in northwest Syria.

The two-day siege did not end until the militiamen and their supporters withdrew from the U.S. Embassy compound in Baghdad.