Yes, The Democrats Want to Take Your Guns 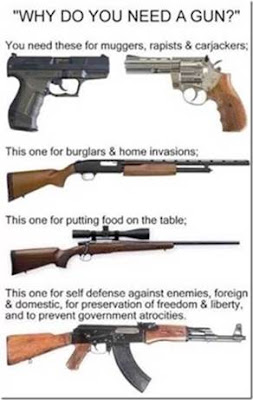 The best gun salesman in recent history was Barack Obama. Because there was a fear that he wanted to go after our guns, firearms sales skyrocketed. Those fears were appropriate, considering who was President of the United States. The thing is, when it comes to our right to keep and bear arms, Barack Obama was but a minor threat. Today's radicalized Democrats, unlike their more strategic predecessors, have no fear of telling you that they don't just want what they call "common sense" gun control, but that they don't want you to have guns at all. They barely stop short of using the word "confiscation".  They have always wanted confiscation, but it's always been a "think it, don't say it" thing because they know that gun control has always been a losing issue for them.

Nearly a couple years ago, California Democrat member of the House of Representatives Eric Swalwell began the liberal path to today's radicalism that basically screams they wish to confiscate firearms when in a USA Today op-ed entitled “Ban assault weapons, buy them back, go after resisters,” he argued that prior proposals to ban assault weapons “would leave millions of assault weapons in our communities for decades to come.”

Swalwell proposed that the government should offer up to $1,000 for every weapon covered by a new ban, estimating that it would take $15 billion to buy back roughly 15 million weapons — and “criminally prosecute any who choose to defy [the buyback] by keeping their weapons.”

Beto O'Rourke was the next one in recent memory to abandon the Democrat tendency to avoid calling for gun confiscation when last September, as a candidate for President of the United States, when asked about his stance on gun control, he replied, "Hell yes, we’re going to take your AR-15".

and Michael Bloomberg have joined the new radical "we want to take your guns" crowd.
Warren asked by a voter if she would support a concealed carry law since “The only thing that saved the rest of the congregation” in the recent Texas Church Shooting “were the other two people there who shot and took out the shooter.”

Bloomberg has voiced even more radical stances on gun control, in his candidacy.

Billionaire Michael Bloomberg, who has a mini-army of bodyguards around him whenever he moves, says guns aren’t for “average” people.

“You just do not want the average American carrying a gun in a crowded place,” the former New York mayor said in Alabama. The presidential candidate said that it’s the “job of law enforcement to have guns and decide when to shoot.”

Yeah, because when seconds count, the police are only minutes away.

His answer dripped of the usual "elite rulership" attitude of the Democrats, which always ends with the idea that you are too stupid to take care of yourself, make decisions for yourself, or defend yourself.

Of course, the Second Amendment's enumeration of our right to keep and bear arms is about more than protecting our lives or property against criminal elements, or hunting. It's about having an armed populace ready to alter or abolish the government should it become tyrannical.

Which got me thinking. If these lefties think that Trump is some kind of fascist, why would they continue to support gun control? Is it really their contention that, if the President is some kind of un-American, Russian spy and fascist, that the government be the only ones with guns?

-- Political Pistachio' Conservative News and Commentary
Posted by Douglas V. Gibbs at 7:31 AM

just a few peski numbers/facts.
in 2016 219 people were killed by rifles, not all of which were ar types.
in 2016 more people dies by drug over dose than were killed during the entire viet nam war.

and you think guns are the biggest problem this country faces???