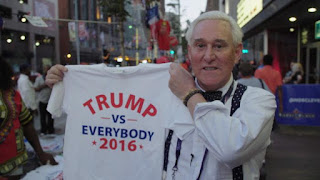 Roger Stone was arrested and convicted for process crimes.  In short, he was trapped while in questioning under oath into seeming like he contradicted himself.  Bad trial.  Bad accusation.  Entrapment, essentially.

After being sentenced to 7-9 years in prison, President Trump complained, and immediately afterward Department of Justice's Bill Barr acted recommending a reduction in Stone's sentence.

Barr says his decision had nothing to do with Trump's Tweets calling for Stone's reduction in time in jail.  The Democrats say otherwise.

In the end, none of this matters.  We must ask ourselves, "Why would Trump demand Barr reduce Stone's sentence, and why would Barr do so under pressure by the President, when in reality all the President has to do if it is really that important is pardon Roger Stone?"

That's like trying to find someone with matches to light your smoke while you are holding a lighter in your hand.

The problem is, the liberal left Democrats are still in impeachment mode, and they are looking for the next thing to attack, and at the moment, this is all they've got.