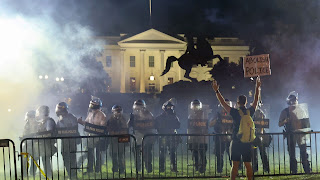 During an interview with Fox News reporter Harris Faulkner, President Donald Trump responded to Joe Biden's fantasy of having Trump removed by military force.  For some reason the Democrat candidate for President of the United States believes the Republicans will try to "steal" the 2020 election.  That's fascinating when all evidence points toward leftist manipulation of elections, and their desire to go to "vote-by-mail" ballots which have an incredible history of better enabling voter fraud.

“Look, Joe’s not all there, everybody knows it,” President Trump said to Faulkner. “It’s sad when you look at it, and you see it for yourself. He’s created his own sanctuary city in the basement of wherever he is, and he doesn’t come out.”

Comedy Central host Trevor Noah of the "Daily Show" also chimed in and worked to help encourage Biden's fantasy about how he dreams of removing President Trump from office with the use of the United States military.

“Let me ask you this, and I know this is a strange question to ask an American politician, may be easier around the world, but have you ever considered what would happen if the election result came out as you being the winner and Trump refused to leave?” Noah asked.

Biden continued after a break and stated, “I was so damn proud. You have four chiefs of staff coming out and ripping the skin off of Trump. And you have so many rank and file military personnel saying, whoa, we’re not a military state. This is not who we are. I promise you, I am absolutely convinced they will escort him from the White House with great dispatch.”

During an online forum with black Americans, Biden claimed that 10%-15% of Americans are just "not very good people" right after he accused President Trump of "dividing people."

Biden later added that he could relate to black people because he was bullied growing up.

“I’m a white man,” he said. “I think I understand but I can’t feel it. I feel it but I don’t know what it’s like to be a black man walking down the street and be accosted, or to be arrested or, God forbid, something worse.”

In the age of the coronavirus scamdemic, Trump moved his next rally to Tulsa, Oklahoma and over a million people signed up for it.  If there is no voter fraud on the Democrat side, thanks to mail-in-balloting, I am figuring Trump will win in November by a landslide, possibly taking as many as 45 States in the Electoral College.

AG Barr says that if the Democrats put mail-in-balloting in place, it would "open the floodgates to fraud."

Even with fraud, I believe that the President's popularity among Americans with each backfire by the Dem,ocrats (impeachment backfired, trying to trap him regarding coronavirus backfired, and now the rioting is backfiring) has gotten so high that even with their attempt to change the election with fraud, Trump will win easily, and the GOP will win back the House of Representatives.

The problem is that with the violent plums dancing in the heads of the Democrats, we may be in for a rough ride either way.  If Trump loses, they will do everything they can to kill conservatism, and turn America into a one party system.  If Trump wins, the cities will burn, and republicans will be targeted by groups like Black Lives Matter and Antifa in a manner very similar to the Democrat-led KKK targeting blacks and white Republicans a hundred-plus years ago with the ultimate goal of killing conservatism and turning America into a one party system.