I miss Sunday Brunch, Democrats are happy about it 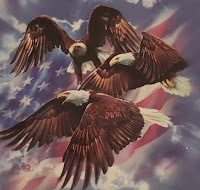 Sometimes, after church, despite the crowds, my wife and I would participate in Sunday Brunch.  While my wife was not a fan of it due to the massive congregation of folks at the restaurants offering brunch, it was fun for me because it was the opportunity to spend extended time with those who I fellowship with at church.  Except, now conversations could flow, and personalities revealed themselves. It was an opportunity to fellowship with like-minds as we broke bread together.

I got to thinking about brunch this morning, not because I traveled by a restaurant that used to hold such meals, but because of McDonald's.

I am not normally a fan of McDonald's.  They constantly find a way to mess up my order, and the food is overall not very healthy for you.  An occasional visit, however, can be satisfying.  They do, after all, have the best french fries out there, and I am particularly fond of their quarter pounder, breakfast burritos, and sausage egg muffin sandwich.

For a while they were serving breakfast all day to compete with places like Jack in the Box, but recently did away with that.  No worries, on Sundays they have always extended their breakfast to 11:30 am.  This morning I had a hankering for a couple breakfast burritos and got in line at the drive-thru around 11:10 am.  "We stopped serving breakfast," came the reply.

A later conversation with the manager on the phone revealed that since folks aren't going to church, late visitors for breakfast doesn't exist.  More people want lunch at that late moment in the morning, now.  Church-goers are staying home, and therefore, are having breakfast at home.

What an interesting turn of events.  In the name of a virus, a minor one at that, we have accepted a government mandate not to go to church, which has also led to Christians spending less time in assembly with each other in other aspects, as well.  We aren't having Bible Studies, we aren't even going to Sunday Brunch, much less McDonald's for a late breakfast.

A New York Times article nearly twenty years ago revealed to us that what we are seeing now by the liberal left is not much unlike Nazi Germany's persecution of the Christian Church eighty years ago.

Among the realities of Nazi Germany was the fact that the National Socialists, like their communist counterparts, abhorred Christianity, and sought to end church gatherings.  In a 108-page outline prepared by O.S.S. investigators to aid Nuremberg prosecutors, titled ''The Persecution of the Christian Churches,'' a summary has been offered regarding the Nazi plan to subvert and destroy German Christianity.  Destroying the Christian faith, according to the German Nazi leadership, was considered ''an integral part of the National Socialist scheme of world conquest.''

From the NY Times article:


In the 1920's, as they battled for power, the Nazis realized that the churches in overwhelmingly Christian Germany needed to be neutralized before they would get anywhere. Two-thirds of German Christians were Protestants, belonging to one of 28 regional factions of the German Evangelical Church. Most of the rest were Roman Catholics. On one level, the Nazis saw an advantage. In tumultuous post-World War I Germany, the Christian churches ''had long been associated with conservative ways of thought, which meant that they tended to agree with the National Socialists in their authoritarianism, their attacks on Socialism and Communism, and in their campaign against the Versailles treaty'' that had ended World War I with a bitterly resentful Germany.

But there was a dilemma for Hitler. While conservatives, the Christian churches ''could not be reconciled with the principle of racism, with a foreign policy of unlimited aggressive warfare, or with a domestic policy involving the complete subservience of Church to State.'' Given that these were the fundamental underpinnings of the Nazi regime, ''conflict was inevitable,'' the summary states. It came, as Nazi power surged in the late 1920's toward national domination in the early 30's.

According to Baldur von Schirach, the Nazi leader of the German youth corps that would later be known as the Hitler Youth, ''the destruction of Christianity was explicitly recognized as a purpose of the National Socialist movement'' from the beginning, though ''considerations of expedience made it impossible'' for the movement to adopt this radical stance officially until it had consolidated power, the outline says.

Attracted by the strategic value inherent in the churches' ''historic mission of conservative social discipline,'' the Nazis simply lied and made deals with the churches while planning a ''slow and cautious policy of gradual encroachment'' to eliminate Christianity.

The prosecution investigators describe this as a criminal conspiracy. ''This general plan had been established even before the rise of the Nazis to power,'' the outline says. ''It apparently came out of discussions among an inner circle'' comprised of Hitler himself, other top Nazi leaders including the propaganda minister, Joseph Goebbels, and a collection of party enforcers and veteran beer-hall agitators.

The regional branches of the German Evangelical Church, the main Protestant body, were often administered and financed through governmental agencies. The Nazis saw a distinct advantage in having Protestant churches ''whose supreme administrative organs were located within the borders of Germany,'' the outline says. This facilitated plans ''to capture and use the church organization for their own purposes'' and ''to secure the elimination of Christian influences in the Evangelical Church by legal or quasi legal means.''

The Roman Catholic Church, centrally administered from Rome, posed a different problem for the Nazis, whose relationship with that church in the 1920's had been bitter. In 1933, when Germany was under Hitler's total control, the Nazis made ''unmistakable overtures'' to the Christian churches in general, and to Catholics in particular.

Having already witnessed fairly smooth relations after the 1929 Lantern treaty between Mussolini's fascist regime and the church in Italy, many German Catholics ''accepted the Nazi proposition'' of peaceful coexistence. In July 1933, a Concordat was signed between the Reich and the Holy See.

''For the first time since the Middle Ages, the Reich itself had entered into an agreement with the Roman Catholic Church,'' the outline says. ''Moreover, the new treaty was apparently entirely to the advantage of the church. In return for the retreat of German Catholicism from the political scene, the church was guaranteed, by international treaty, freedom for Catholic organizations [and] maintenance of denominational schools and youth education.''

All Hitler seemed to demand in return was ''a pledge of loyalty by the clergy to the Reich government and a promise that Catholic religious instruction would emphasize the patriotic duties of the Christian citizen.'' This posed no big problem for the church, the outline asserts. ''Since it had always been the practice of the Catholic Church to abide by established governments and to promote patriotic convictions among the faithful, these stipulations of the Concordat were no more than legalizations of an existing custom. The Concordat was hailed by church and state authorities as marking the beginning of a close and fruitful collaboration.''

Of course, the churches stayed in Hitler's good graces for only as long as the Nazis considered their cooperation expedient. Soon after Hitler assumed dictatorial powers, ''relations between the Nazi state and the church became progressively worse,'' the outline says. The Nazis ''took advantage of their subsequently increasing strength to violate every one of the Concordat's provisions.''

In 1937, Pope Pius XI denounced Nazi treachery in an encyclical that accused Hitler of ''a war of extermination'' against the church. The battle had been joined on some fronts. Nazi street mobs, often in the company of the Gestapo, routinely stormed offices in Protestant and Catholic churches where clergymen were seen as lax in their support of the regime.

The dissident pastor Martin Niemoller spoke openly now against state control of the Protestant churches. He was arrested and imprisoned in 1937 for using his pulpit for ''underhand attacks on state and party.'' When a judge acquitted him, ''on leaving court he was arrested by the Gestapo and sent to a concentration camp where he remained until the end of the war,'' says the outline.

Without going through the rest of the article, I believe the obvious is clear.  As did Nazi Germany, today's socialists who call themselves Democrats hate Christianity, and are doing all that they can to kill the Christian Faith.  In 2012 they tried to vote God off of their platform.  Now, in the name of a virus, they have again turned against God, this time using the fears of the people to disallow church services and gatherings.

Like the Nazis, and like Karl Marx (who "saw the eradication of religion as the absolute sine qua non of a “just” socialist society"), they see Christianity as an obstacle, and it is their goal to end the faith in America, believing that if they do so, all of their opposition will be silenced and their obstacles will be removed.  Then, socialism may be implemented unimpeded.

A loss of church services and Sunday Brunch, here in America, is only the beginning.

I can only hope that like the Black Robed Regiment during the American Revolution that pastors in America will recognize the true danger, and quit separating religion and politics and realize that unless Christians across America stand in unison against the rising tyranny, American Liberty is doomed to indeed become just another fallen idea in the dustbin of history.