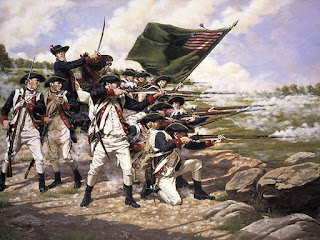 When we look back in history we realize that liberty is the exception, not the rule.  In ancient civilizations such as Egypt, the level of liberty one enjoyed depended partly upon location, and largely upon if the Pharaoh was a benevolent ruler, or a tyrannical one.  In Greece, while during the moments of democratic stability there was liberty, democracies are short in their lives and violent in their deaths.  So, liberty died during the chaos in between the rise and fall of each democracy in the Greek States.  Liberty found a home for a while in the Roman Republic, after the kingdom, and before the rise of the Caesars during the long and tyrannical period of the Roman Empire.  In small corners of the world liberty would sprout up, but until the Saxons invaded England and brought their system of individualism and the rule of law to the British island, American Liberty's historical launch had sputtered and wallowed in pain.

The Magna Carta in 1215 launched the movement, followed by the Glorious Revolution in 1688, and the English Declaration of Rights in 1689.  Despite those documents, and the English chasing liberty in a way the rest of the word ignored and did not understand, the British Empire ultimately rained tyranny down upon the English Colonists in the New World.

America, however, was different.  The launch of the colonies required rugged individualism and a faithful adherence to the rule of law.  It was a natural breeding ground for the concept of liberty.  Without liberty, America could not have survived the savage wilderness and the difficult early years of colonization.

Armed with the knowledge of the Saxon System, biblical references to liberty largely based on the history of Israel, and their own experiences (along with writings from Egypt, Greece, and the Roman Republic) the Founding Fathers set out to make sure that in this country liberty was not a short flash.  They aimed to make it long-lasting, to protect it from tyranny, and secure it in the possession of the people.  They aimed to make sure that liberty's exceptional nature endured, so they wrote a social contract to do exactly that.  That contract is the United States Constitution.

In the Preamble it explains that the document was written to Secure the Blessings of Liberty, and through the pages of the document a new government is established, and the principles of localism and a limited federal government are laid out.

And on September 17, 1787, it was finished, and American Liberty was truly born, not to be only something Americans knew, but to be a shining beacon for the world to follow, and emulate.